South Cushitic is a subbranch of the Cushitic branch of the Afro-Asiatic language family, historically spoken by peoples living south of the Horn of Africa (where most Cushitic speakers are situated), these Cushites seemingly made it as far as Southern Africa as early as 2,000 years ago or more [1], having reached areas like Kenya and Tazania much earlier.

Some sources claim they were in some areas South of the horn as early as the 1st to 3rd millennium BCE. [2] At any rate, they ended up having a profound effect on several groups across Southeast and even Southern and Central Africa and the effect they had on several Southeast African groups is ultimately the focus of this post. 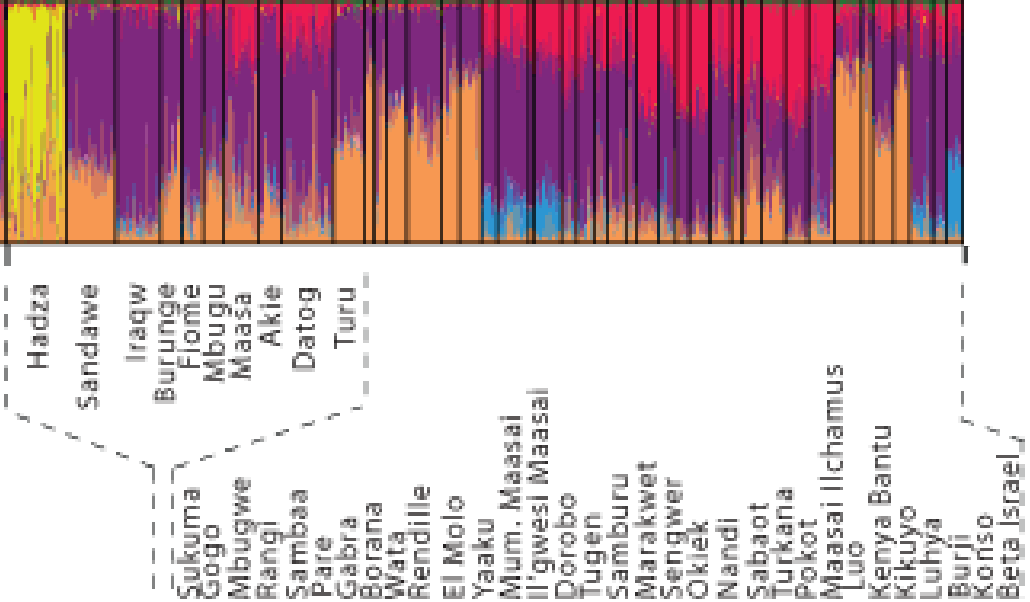 Above you can see an STRUCTURE analysis (quite similar to an ADMIXTURE analysis) from Tishkoff et al. 2009 [3]. In it we have an actual South Cushitic speaking group. The Iraqw who in this case are the peak of Tishkoff's "Cushitic" or at least "pseudo-Cushitic" cluster/ component (coloured purple) and as you can see; this component which peaks in a Southern Cushitic group that currently inhabits Tanzania- 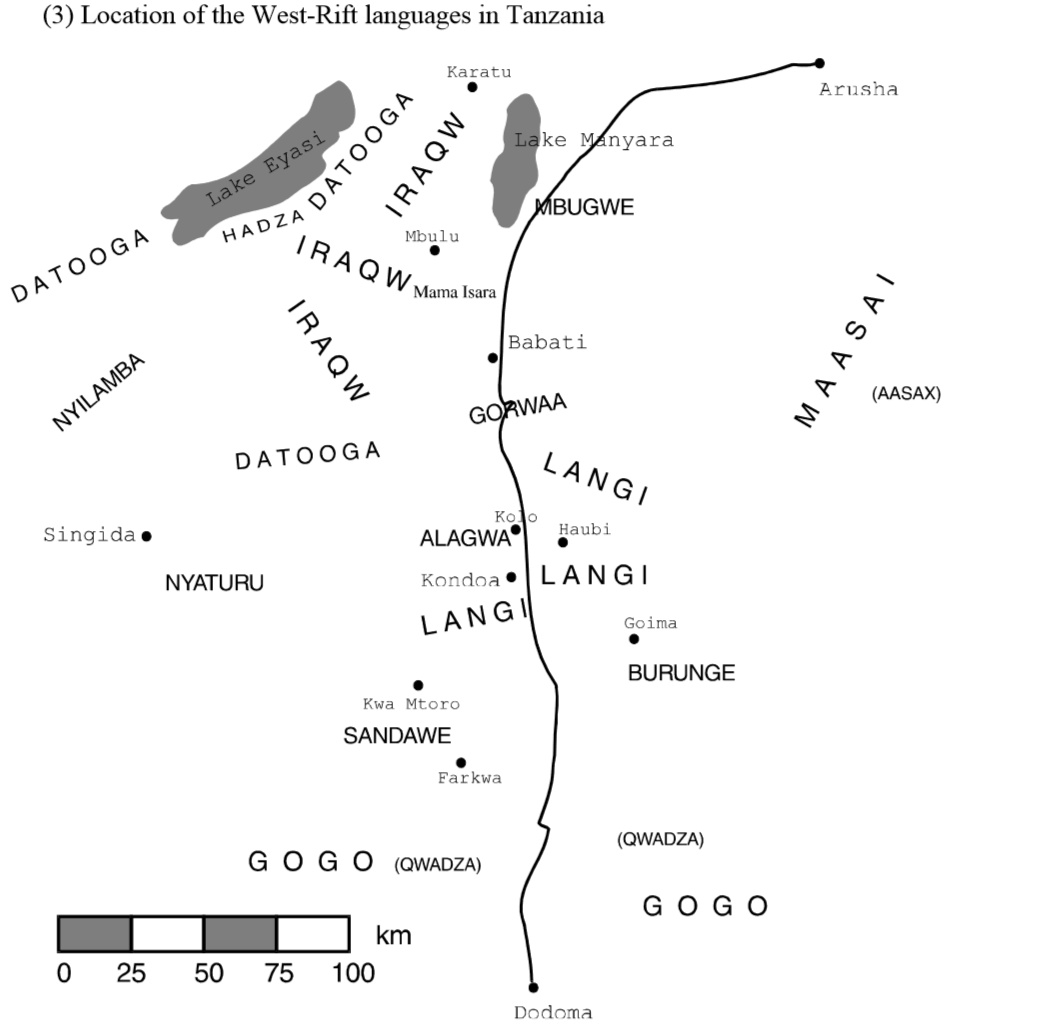 - is profuse all over Southeast Africa. Among the Maasai, among the Datog, among the Sandawe, the Mbugu etc. This is essentially because all of these groups (many of whom also display West Eurasian/ West Asian admixture) have Cushitic admixture/ West Asian admixed East African pastoralist admixture.

The Maasai, for example, tend to be about ~50% Cushitic, the Datog even exceed that percentage while various other populations such as the Kikuyu in Kenya and countless other Bantu speaking groups in Southeast Africa also have Cushitic admixture all owed to a South Cushitic source/ something ancestral and similar to the Iraqw who are among the last few remnants of what was arguably a much bigger subbranch of the Cushitic branch.

Many of them such as the Maasai have even taken on Cushitic customs such as the one outlined above. That same practice of drinking cattle blood with milk is one that was utilized by Bejas (North Cushites) in Northern Sudan as early as 100 BCE as noted by the geographer Artemidorus. It was also utilized by Somalis (East Cushites) as early as 800-900 CE during the Middle Ages as noted by a Chinese source of the time. [4] It's also apparently, a generally known Cushitic custom. [5]

But of course, many of these groups such as the Bantu speaking groups inherited much more than shared ancestry with populations such as Somalis, Agaws, Ḥabeshas, Afars and Oromos; they also inherited things such as lactase persistence through this Cushitic admixture from South Cushites. 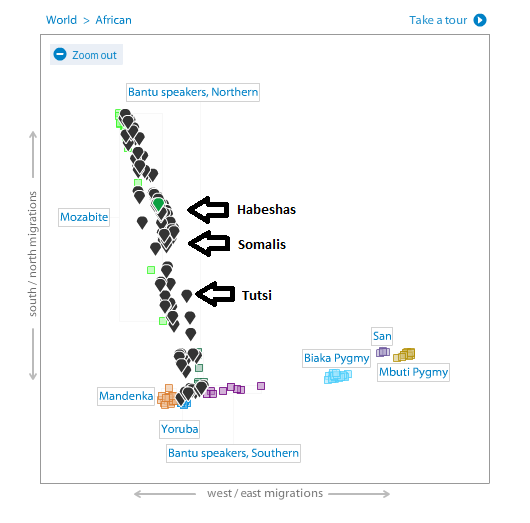 This South Cushitic admixture is also likely why many groups in Southeast Africa such as the Tutsi, Maasai and so on; sometimes display rather "Horner-esque" facial features (facially similar to various Cushitic and Ethiopic speaking populations in the Horn, for example). 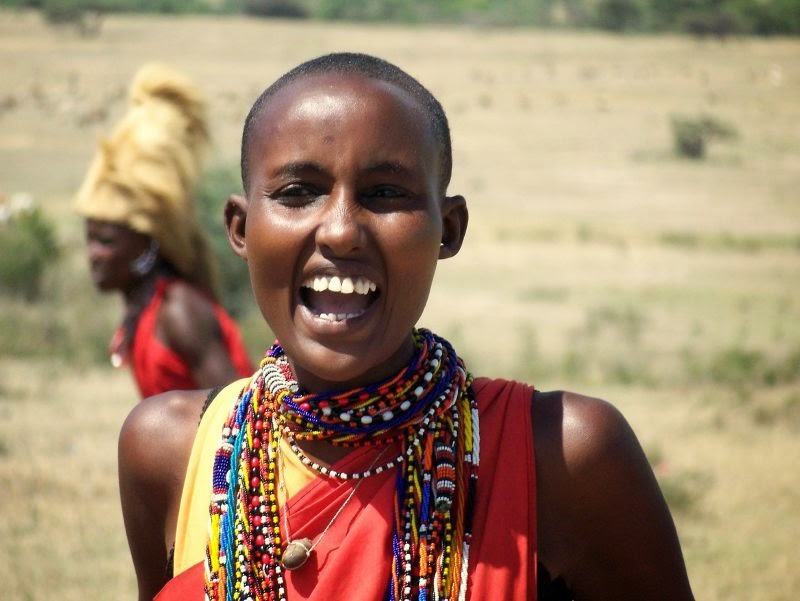 The Maasai woman above, for example, could quite easily pass in the Horn of Africa among populations like Oromos, Afars, Somalis etc. Though her ethnic group is essentially a mixture between South Cushites (who were from the Horn and closely related to groups such as Somalis, Afars, Oromos and so on) and "Nilotes" with some "Pygmy", "Khoisan" and Niger-Congo (Bantu) peppered in.

Modern South Cushites themselves have somewhat clearly mixed with their surrounding Nilotic, "Khoisan" and Bantu neighbors which is likely rather demonstrable in their haplogroups (Y-DNA for example [7] [8]):

E1b1a/ E-V38 is ultimately a marker most common among/ characteristic of Niger-Congo speakers/ people such as the Bantu while Haplogroup B can seemingly be rather common among the Nilotic of Southeast Africa.

Nevertheless they've maintained a E1b1b/ E3b majority (very common all over the Horn and Northeast Africa) whilst also having Haplogroup T/ T-M184 carriers among them, a marker found all over the Horn (mostly peaking in Somalis; especially those of Dir and Isaaq origins). Now, keep in mind that Haplgroups merely mark migrations for the most part; being 22% E1b1a does not mean they are about 22% Bantu admixed.

A population could carry a marker at a rate of 60% and be, in terms of autosomal DNA/admixture (a real representation of their ancestry), completely distinct from the other populations this Haplogroup occurs amongst, like I demonstrated with Finns with my last blog post. All things considered, it's clear that the Iraqw and South Cushites like them weren't the only ones spreading ancestry; their Nilotic and Bantu neighbors ultimately had an affect on South Cushites as well.

In the end, various groups from Rwanda to Kenya to Tanzania to Mozambique have clearly been touched by ancient (and also perhaps not necessarily ancient) South Cushitic speaker expansions across their region; which had not only a cultural impact on some of them but also a genetic one; making some populations such as the Datog by majority "Cushitic" and others such as the Maasai essentially half.

So next time you're in Tanzania or Kenya and you meet a non-Somali or Oromo who looks strikingly like they're from the Horn even though they claim no Somali or Oromo ancestry; you know where that ancestry mostly came from now.

1. Was there an interchange between Cushitic pastoralists and Khoisan speakers in the prehistory of Southern Africa and how can this be detected? , Roger Blench 2007

2. The Swahili: Reconstructing the History and Language of an African Society, by Derek Nurse, Thomas Spear, Thomas T. Spear, page 34

5. The voices of Africa: the people, by Mary Louise Clifford, Edward S. Ross

1. The Pie Chart honestly just simplifies the percentages (f.e. the Iraqws tested in Hirbo et al. [8] were about 13% T-M184 rather than 11%; I made it that way to better fit the diagram); it's just supposed to put the point across that their main markers are E3b subclades followed by E1b1a, T-M184 and Haplogroup B. Also, keep in mind that in Hirbo et al.; Haplogroup T is listed as "K2" (it used to be called this but isn't anymore). It's also a bit of a shifty representation as it adds together the results of two different papers; Hirbo et al. [8] and Wood et al. [7] but it serves its purpose in putting the point across about the haplogroup frequencies I mentioned.
Posted by Awale Ismail at 1:18 PM