ANE & its connection to Caucasus admixture

For those of you who are wondering what Ancient North Eurasians (ANEs) are; they seem to be a pre-historic group who are if anything more related to Upper Paleolithic Siberians (No, don't think of East Asians or peoples like them) than any modern population, they also prove relatives of "West Eurasians", sharing an origin point with the ultimate ancestry of Loschbour and the West Eurasian side in Middle Easterners and Neolithic Near Eastern farmers (what part of them isn't WHG at least) as is demonstrated in this diagram in Lazaridis et al.'s supplemental:

They also found that this population apparently contributed significantly to Native Americans as they demonstrate with this other diagram from their original paper (that I often share) whilst positing that they contributed to Near Easterners as well. Another study improved upon this, finding that ANEs contributed significantly to various populations across Eurasia. I.e. to Central Asians, various predominantly "East Asian" (autosomal DNA/ admixture wise) Siberians and so on. There may even be a small ANE element in East Asians like the Han Chinese...

MA-1 is "Mal'ta boy"; a little boy who lived approximately 24,000 years ago whose remains were found in Siberia. His genome was eventually sequenced; he seems to be a rather unmixed example of Ancient North Eurasians. Other remains were found and their genomes were sequenced like AG-2 (Afontova Gora-2) for example... 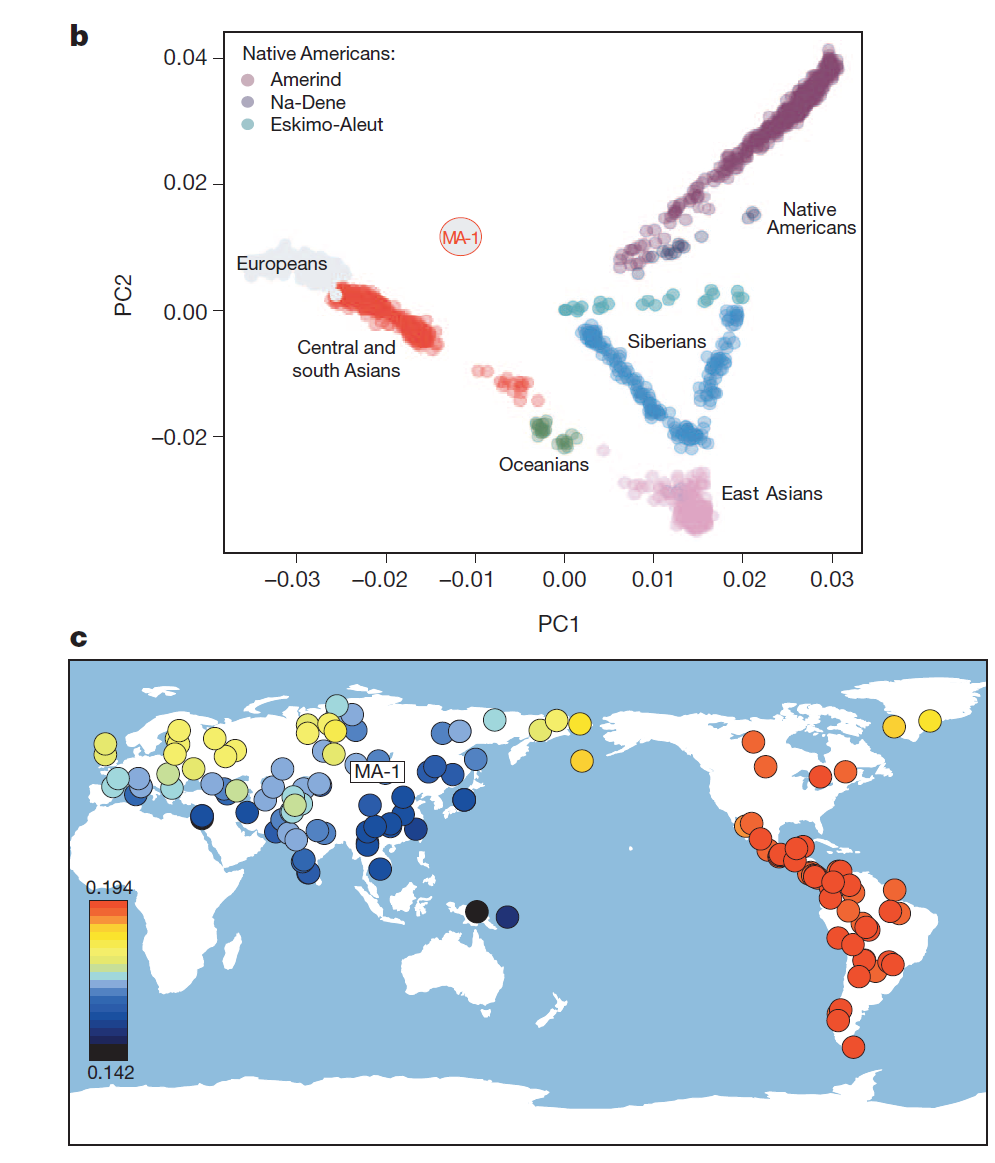 As they mention &  Lazaridis et al. discovered earlier on; the rest of the admixture in Native Americans is East Asian-like. So the idea that they were basically exactly like East Asians when they crossed over to the Americas is outdated now, instead it's currently believed that they were part ANE & part pre-historic "East Asian" when they made it to the Americas. Perhaps as Raghavan et al. notes in its abstract; this is why some ancient Native American remains that have been found do not "morphologically" resemble East Asians.


Lazaridis et al. makes mention of there being ANE input in the populations of West Asia & interestingly a new analysis by the author of Eurogenes which seems as adequate at identifying ANE as Raghavan et al. is (can find similar to the same results) whilst utilizing different techniques indeed finds ANE in West Asia whilst unsurprisingly finding none in Northwest Africa with only trace amounts (1-2%~) in Lower Egypt (Northern Egypt).

The pattern for West Asia seems to be that the Caucasian populations have the highest proportion of ANE admixture and they actually demonstrate this in a recent plot Davidski over at Eurogenes (the author) shared where he demonstrates that ANE is the cause for "West to East Shift" in Pan West Eurasia PCA plots: 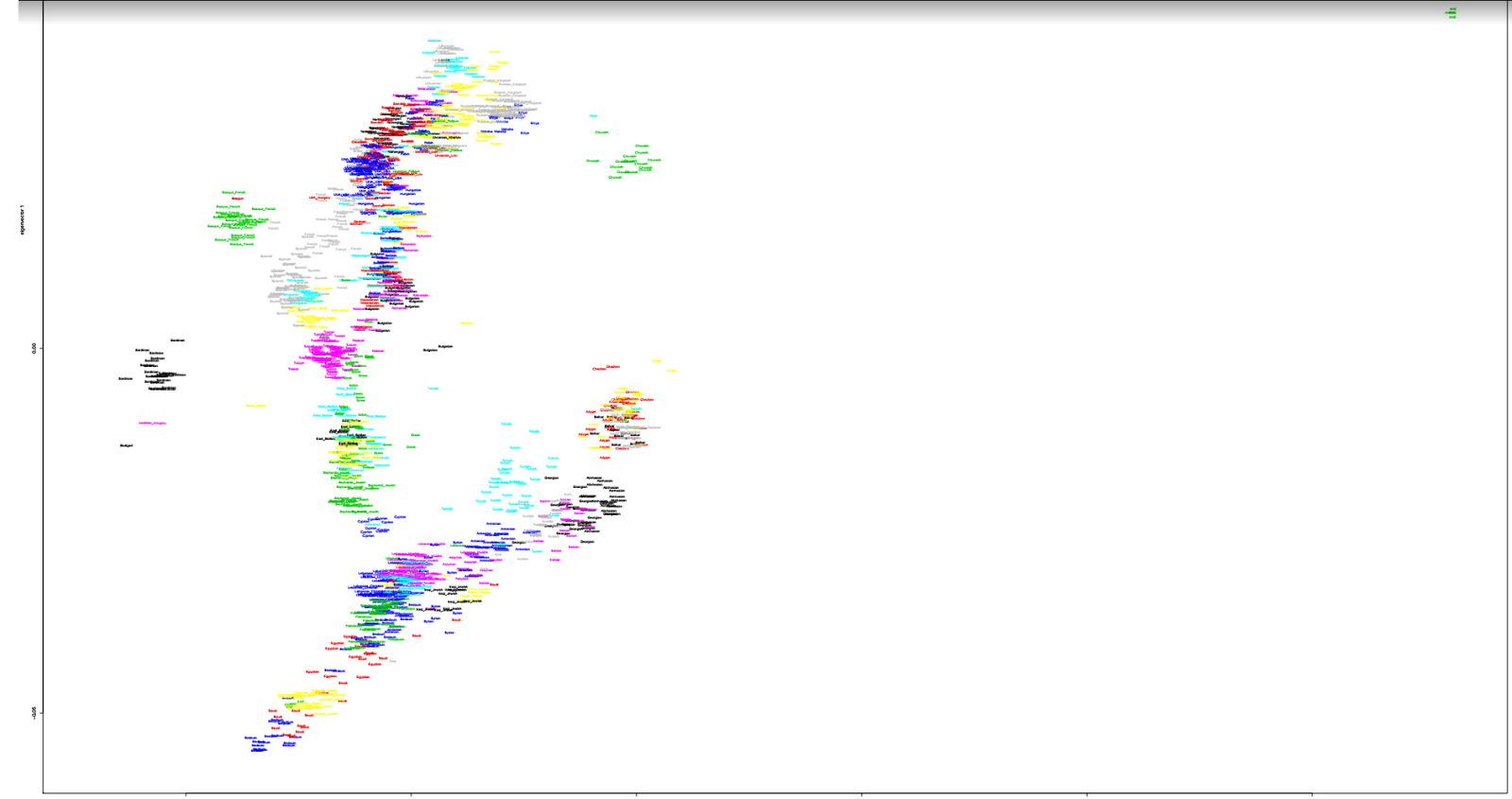 Caucasians seem to have the most with Turks, Persians (Iranian samples), Assyrians & Levantines coming in right behind them while Peninsula Arabians (Bedouin B, Saudis) seem to lack ANE altogether though Yemenite Jews who look to be a good representation perhaps of the pre-Islamic Arabian Peninsula; have small trace amounts of 1 to 2%~ much like Lower Egyptians.

Here are the proportions in certain Caucasians simply to give an idea of their levels of ANE admixture/ ancestry:

Link to spreadsheet for the results of West Eurasia as a whole (nearly, at least).

Abkhazians & Azeris have more than even the most ANE admixed populations of Europe who reside mostly in Eastern Europe (17-18%~ being their levels on average). This geographically makes sense to me as the Europeans most effected by ANE admixture are those in the East and if I recall correctly; the entryway of these Ancient North Eurasians into Europe would have likely been the East? So just to the south of Eastern Europe would be the Caucasian mountains where the Caucasian populations would have possibly lived even back then?

Now, this heightened ANE influence has led myself and others to believe that the component most studies either call West Asians or Caucasus/ Caucasian (independent runs do this as well) which is found all across the Middle East from Iran, to Iraq, the Levant, the Arabian Peninsula, Egypt and even one area of Northwest Africa in non-negligible levels (Libya) likely caries an ANE influence with it. As the populations who define it and it also peaks in are the Caucasians like Armenians, Abkhazians, Georgians and so on who have as you can see; a very non-negligible amount of ANE admixture.

One study that I recently ragged on noticed the West Asian/ Caucasus component (dubbing it "Eurasian") and here is its ADMIXTURE run:

For one, you can see the highest proportion of the component in that run is in Turks, Levantines (Druze included) and Persians (Iran) and likewise even Lazaridis et al. with its original PCA plot demonstrates which West Asian populations have the greatest pull toward MA-1 & AG-2:

The clime is clearly-> Turks ~ Persians> Levantines ~ Yahudim> Peninsula Arabians. Some Peninsula Arabians go more south than Stuttgart or Loschbour who are modeled as/ found to be 0% ANE though BedouinB & Saudis have about 5 to 20%~ African admixture (Niger-Congo + Ancestral East African/ Nilo-Saharan) however the current seemingly lack of ANE in them may speak to where they cluster. Nevertheless, Lazaridis et al. points out that it couldn't test the Bedouin (of the BedouinB variety) for ANE due to their African admixture. [1.2]

These are the averages for Persians and Turks who peak in Caucasus/ West Asian admixture in West Asia (while Peninsula Arabians have the least across the entire region):

Arabized Levantines like Palestinians, Jordanian, Lebanese Muslims & Christians alongside Syrians have a little less Caucasus admixture than they do and arguably display less ANE:

Peninsula Arabians have the lowest of the West Asian/ Caucasus ADMIXTURE component and seem to show no ANE admixture whatsoever with only Yemenite Jews showing trace amounts at negligible levels. Northwest Africans (Imazighen/ Berbers) do not tend to show the West Asian/ Caucasus component and if they ever do-> it's a very negligible/ low amount such as the amounts they show in Hodgson et al. (the ADMIXTURE run I shared) where they have far less than even Peninsula Arabians. As a matter of fact; those isolated Tunisians [4] from Hodgson et al. do not even show a pint of West Asian/ Caucasus and an old likely somewhat less fine tuned and accurate analysis by the author of Eurogenes finds that they lack ANE [-] [-] which would be consistent with the clime of West Asian/ Caucasus admixture across West Asia itself-> the more you have of this admixture, the more ANE. Libyans show non-negligible levels of this component but they look fairly similar to Lower Egyptians who have only small trace amounts (negligible levels) like Yemenite Jews.

One could argue that African admixture is skewing the results of some of these groups however Arabized Levantiens as can be noticed in Hodgson et al.'s run are non-negligibly African admixed (5 to 15%~), other studies have launched inquiries into this in the past and found that they are something along the lines of 5 to 15%~ African admixed [5] (Niger Congo + Ancestral East African) but they still show ANE levels which I would argue are quite reliable. For one, Levantines cluster just to the right of Tuscans, Sicilians and Greeks who in Lazaridis et al. are roughly shown to be as ANE admixed as they are; the Eurogenes analysis also finds relatively the same levels in lets say Tuscans, Sicilians and also Yahudim like Ashkenazim & Maghrebim such as Moroccan Jews who in Lazaridis et al. and even the Eurogenes Pan West Eurasia plot pull toward ANE relatively as much as the Arabized Levantine populations do.

The clime in ANE admixture across West Asia or even the more large MENA region seems for now to be clearly linked to a group's proportion of Caucasus admixture with the Caucasian, Iranian (Kurds seem to always come out fairly similar to Persians) & Turkish populations being its peak. The Levantine populations (Yahudim & Cypriots included) as well as Iraqis (i.e. Arabized Iraqis & Assyrians) at large seem to follow suit and then it would be the trace amounts in Lower Egyptians and Yemenite Jews. The rest of "MENA" looks to be a dead zone of sorts for ANE admixture.

Most of the Caucasus in Arabians is likely barely different from their Southwest Asian/ Arabian component which is visible in that Hodgson et al. run/ it's more indicative of unmixed Middle Eastern/ West Asian admixture that would theoretically (as we're learning from Lazaridis et al. & other studies) prove to be-> West Eurasian + Basal Eurasian (whatever this component may turn out to be once we have ancient genomes from the Middle East & preferably also East Africa sequenced).

I'll definitely blog about this someday if we ever have new results to counter anything I've posted.

1. The BedouinA samples are not actual Peninsula Arabians, some Saudis may not be as well. BedouinA were cut off from other Bedouin in Lazaridis et al. and often are in many PCA plots, studies & independent runs because they seem to look more like the Arabized Levantine populations they live amongst (Syrians, Lebanese etc.) and display similar admixture levels to them alongside ANE admixture, they also of course overlap with them them in plots-> something actual Peninsula Arabians (discounting Yemenite Jews) who are distinct from Levantines and seemingly lack ANE influences simply do not do.

2. Ultimately though... The only way we'll really know anything conclusive about the Middle East, the Caucasus & North Africa is by sampling ancient genomes in the area. Once we do that... Everything will be truly reliable. So I would also advise an air of skepticism whilst taking all this in.

Thanks must go to Davidski/ Polako for all his great work over at Eurogenes.

I'd also like to thank a member of Forum Biodiversity whose username I won't add here until I get his permission. He is in the end responsible for bringing this ANE influence in Caucasus to my attention. So... Thanks, man.