A recent study based on cranio-metric data essentially proposed something quite preposterous once genetics is taken into account and that's the following:

This shared drift and closeness between Eastern Non-Africans and West Eurasians whether ancient or modern is seemingly owed to the fact that all Out-of-Africa populations are essentially descended from an extremely ancient pre-historic bottle-necked population like the following diagram from Lazaridis et al. 2013 [2] displays: 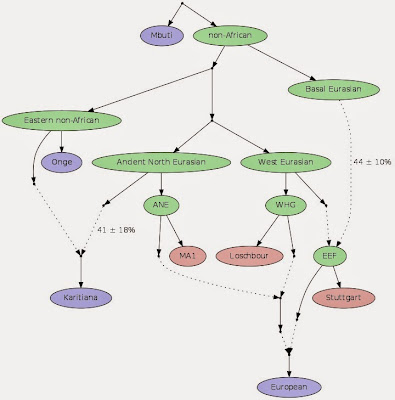 There seems to be little doubt in terms of autosomal DNA about this fact and their Haplogroups somewhat support this as well. Then there's the fact that Haak et al. [3] from what I recall proved Ust-Ishim [4] occupies a basal position to Eastern Non-African groups like the Andamanese Onge and East Asians alongside European Hunter-Gatherers groups such as Western European Hunter-Gatherers as the quote below stipulates:


This in a vague sense means that Ust-Ishim was in a state that Western European Hunter-Gatherers, East Asians and groups like the Onge are ultimately only "downstream" from as in they diverged from a shared state quite like Ust-Ishim regardless of whether or not he was alive around the time when the ancestors of Eastern Non-Africans, Ancient North Eurasians & Western Hunter-Gatherer-related groups diverged.

The Out-of-Africa model in terms of how it exactly happened and whether or not there were various slow dispersals rather than one is not entirely known from what I recall but one thing's for sure:

So some idea where a distinct group of ancient Africans left the continent for Eurasia and then made it to areas like Melanesia and Australia with a second migration carrying the distinct ancestors of Europeans and East Asians is just not in line with the genetic data and that's what's ultimately most relevant in making such inferences about populations and their relations to each other; genetics.

Another big issue for this model is simple, in truth. Australo-Melanesians, Andamanese and East Asians are seemingly closer to each other than they either is to Europeans often prompting various population geneticists to lump them into a sort of "clade" with one another like "Eastern Non-African" in Lazaridis et al. 2013 or similarly in Kay Prüfer et al. 2014 [5] as I touch upon here.

The argument perhaps being that they share extra ancestry with each other that they don't share with Ancient North Eurasians or Western European Hunter-Gatherers, suggesting that there's another extra node in the Out-of-Africa family tree that they ultimately diverged from like you see in that Lazaridis et al. table where the East Asian-related ancestry in Native Americans like Karitianas seemingly comes from the same "ENA" node as Onges.

The question I'm merely posing here is simple; will things grow more complicated for this supposed node or part of  the Out-of-Africa family tree?

This is a possible outcome in my humble opinion especially once we get ancient DNA data from across Oceania, Southeast Asia & East Asia.

This grouping may even collapse to some extent and make it seem more like Eastern Non-Africans are partially descended from separate Out-of-Africa nodes downstream of Ust-Ishim that merely intermixed to some great extent in pre-history hence their closer affinity to each other over pre-historic West Eurasians like Western European Hunter-Gatherers; a model I've come to suspect but that could be entirely wrong. [note]

For now I'd say one thing is for sure... Papuans, Australian Aborigines, the Andamanese; these groups are closest to East Asians and Polynesians when it comes to the Human family tree but how this will make sense someday within the Out-of-Africa family tree in general like whether or not this Eastern Non-African clade will remain for the most part is what could be shifty but the greater closeness between these groups is not going to change.

5. The complete genome sequence of a Neanderthal from the Altai Mountains, Kay Prüfer et al.

1. The non Non-Homo-Sapien-Sapien ancestry in Eastern Non-Africans I'm referring to would be both Neanderthal & Denisovan admixture.

2. From what I can tell; Haak et al. didn't include groups like Papuans in its analysis when it made that statement about Ust-Ishim being basal European Hunter-Gatherers and Eastern Non-Africans so I contacted Iosif Lazaridis who was involved in the study and he essentially confirmed that Ust-Ishim would indeed be basal to Eastern Non-Africans like Papuans or Australian Aborigines as well though he noted that the Denisovan admixture in these groups can complicate such models.

3. Hodgson et al. (the sixth reference) is not relevant in anyway here except in showing those parties interested; direct proof that groups such as Arabians have African admixture. You can basically consult any of its admixture analyses to see that proven for you or even observe Lazaridis et al.'s K=20 admixture analysis to see the same kind of data where ancestry related to the ancestry in groups like Dinkas and Yorubas surfaces in various "Arab" populations including Peninsular Arabians.

4. There's also the fact that Eastern Non-African groups haven't been as focused on in population genetics as West Eurasians so a good amount of their lack of strong differentiation might be due to this...
Posted by Awale Ismail at 9:46 PM