One thing that's really been of interest to me is the "extra" West Eurasian/West Asian related element in Agaws (Xamir/Afar samples & Beta Israels) and its origins.


Beta Israels and the Xamir (who may perhaps be Afars, though I doubt it. Check this comment section) have less of the later West Eurasian elements in the Horn that seem to mostly or entirely be lacking in all so far sampled Somalis but why? [note]

I think it takes some special pleading to claim the lesser influences in Agaws were brought to the Horn entirely by Proto-Ethio-Semitic speakers because these influences also seem to exist in Wolaytas who are a Southwestern Ethiopian and Omotic speaking population: 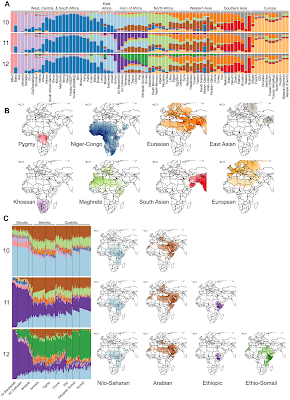 What's interesting about the Wolayta is if you look at their "mixture proportions" in various ADMIXTURE runs; they work quite well as a hybridization between an Agaw-Habesha type population and Ari Cultivators:

This suggests that they may seriously be the result of such a mixture OR they're more likely a mixture between Highland East to Lowland East Cushitic speakers in the region and an Ari-like population. This coincides a bit with how we once got the genomic results of a fellow who was apparently paternally Gurage and maternally Sidamo yet he didn't look too off from Northern Highlanders such as Agaws and Northern Habeshas in his results.

This may suggest that the influence in Agaws, that perhaps predates the Proto-Ethio-Semitic arrival, is in fact a pretty old one that might have made its way across much of the Ethiopian Highlands? It'd certainly be a treat to get more genomes from Southwestern Ethiopia. 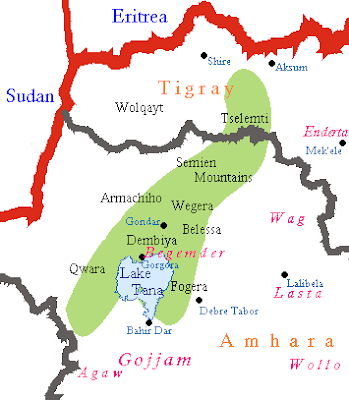 Even when all of that is taken into account, one must grasp the history of "Agaw" populations. Beta Israels were only Ethio-Semitized within the last few centuries, and as you can see, maintain a profile you may expect from pre-Ethio-Semitic Northern Highlanders; lower new West Eurasian admixture scores and less West Eurasian ancestry than the likes of Tigray-Tigrinyas.

Then we have the Xamir Agaw samples, and whether or not they are Afars, it once again takes special pleading to argue that they derive 10-15% of their ancestry from the Southwestern Arabians who left their mark on Habeshas when neither Xamirs nor the Afar have been Ethio-Semitized and I doubt trade contact and such would cause them to incur substantial admixture from surrounding Habeshas without even being Ethio-Semitized.

Both Xamirs and Afars live in rather isolating environments (Xamirs are concentrated in a mountainous region (it's the Highlands of course...) with rivers around as well, if I recall correctly) and Afars live in one of the world's most unforgiving deserts.

Then one might want to take the uniparental distinctions between Beta Israels and the likes of Tigrinyas and Amharas into account [3]: 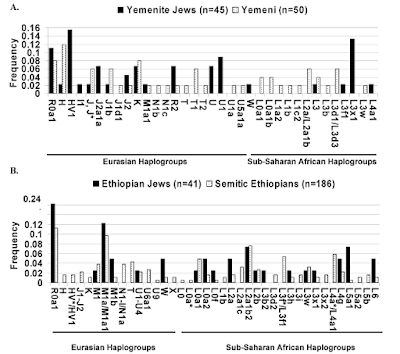 Those Ethiopian Jew/Beta Israel Haplogroup frequencies are almost identical to the results from another study and in both cases there are certain Eurasian markers found in Ethiopian Semitic speakers that are lacking in Beta Israels such as T, J, H & X which are also, so far, missing in Somalis.

Someone more knowledgeable than myself in regards to these Haplogroups and what to associate with them may want to chime in but I do wonder if it's possible that the Southwestern Arabian settlers in the Highlands brought these lineages to the region although mtDNA J & T seemingly exist among the Northeastern Sudan residing & Cushitic speaking Beja which is intriguing.

So what brought this influence to the Highlands but was avoided by Southern Cushitic speakers who migrated south and Lowland East Cushitic speakers like Somalis whose ancestors eventually migrated east into the northern part of the Somali Peninsula? 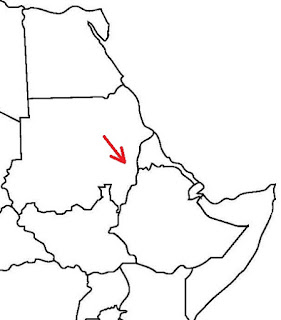 I often assumed the above... That peoples more north in Northeastern Africa migrated southwards and were possibly carrying more northerly and Copt-like or related ancestry and for some reason managed to leave a noticeable impact on the Northern Highlands and eventually, perhaps via proxy, regions more south.

If this had happened early enough then many of the peoples in Northern Sudan might have been genetically very similar to the Cushitic speaking Horn Africans of the time, evident by how there definitely seems to be some substantial pre-historic shared ancestry between even Somalis and Sudanese Arabs and how Sudan was likely inhabited by Cushitic speaking peoples (discounting Bejas) before the eventual dominance of Nilo-Saharan and then Arabic.

For all we know there's actually more "outside" admixture in Agaw populations and Highlanders as a whole than Omotic-related admixture and this later West Eurasian admixture indicate. If their early ancestors mixed with a people who were say "70-80% Somali-like" but just had some later West Eurasian influences then the influence of these people in Highlanders, even if they were literally a hybridization between these migrants and earlier Highland inhabitants, might be difficult to notice without ancient DNA. 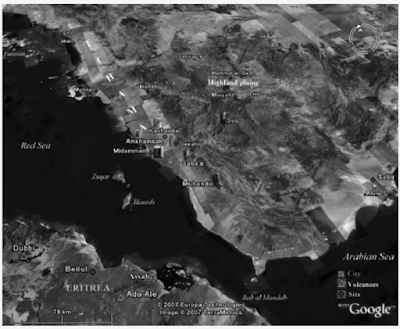 Ties with Southwestern Arabia/Yemen cannot be fully ruled out as well. There's evidence of cultural ties between the two sides of the Red Sea dating back to even 2,000 BCE [4] but in this case the influence looks to have clearly come from the African side of the coast and not the opposite end so perhaps this is a poor contender.

So yes... This looks like quite the unsolved debacle. Is it owed to Ethio-Semitization? Doubtful. Is it owed to some migrations from further north perhaps bringing certain farming techniques or what have you? Who knows... We need more modern and ancient DNA. Is it owed to pre-historic exchanges with Southwestern Arabia? Again... Can't be sure but perhaps more doubtful in my personal opinion.

We can only be sure that it exists and that it seems to be of possibly pre-500 BCE to 1,000 BCE origins (predating Proto-Ethio-Semitic's advent) and may in fact be present in the likes of Highland East Cushitic speakers, many of whom have been assimilated into the Oromo ethnic group, and not just Northern Highlanders.

4. The late prehistoric standing stones of the Tihâma (Yemen): the domestication of space and the construction of human-landscape identity, Lamya Khalidi
Posted by Awale Ismail at 6:33 PM