How things are looking so far

As David's recently pointed out, it does seem as though the old fateful triangle still remains: 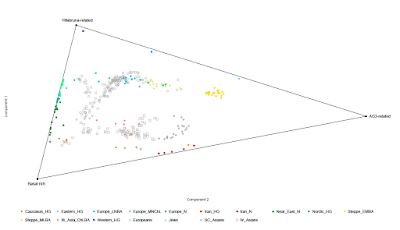 Most West Eurasian populations still look like they're mostly, on a basal level, divvied up between a Basal Eurasian rich component (rather similar to the old "ENF" cluster), Ancient North Eurasian-related ancestry and Western European Hunter-Gatherer/Villabruna-cluster-related ancestry.

It seems that, in this set-up, the main distinction between groups such as Neolithic Iranians (alongside Caucasus Hunter-Gatherers) & Neolithic Levantines is that one is "Basal-rich + ANE"  and the other is "Basal-rich + Villabruna":

The first PCA where the triangle is clearly visible is directly based on David's new Basal-rich K=7 ADMIXTURE run but it's data is still in line with what we see in a PCA directly based on autosomal SNPs like the one below: 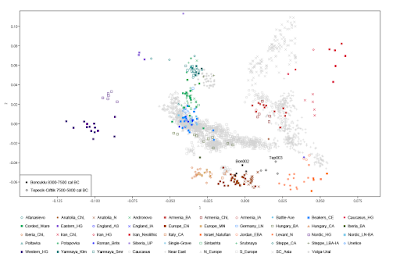 So it seems David's indeed come up with a decent model here. What we really need now is to figure out exactly what "Basal Eurasian" is and to understand some of the earlier pre-history of West Asia to a point where we can grasp how the substantial Ancient North Eurasian-related and Villabruna-related ancestry, found in its Neolithic and Epipaleolithic inhabitants, got there. [note]

2. The Demographic Development of the First Farmers in Anatolia, Kılınç et al.

1. The "Basal-rich" cluster itself is likely to be a mixture between something related to European Hunter-Gatherers like those of the "Villabruna/WHG" cluster and Basal Eurasian ancestry. Even the new Lazaridis pre-print implies as much via this figure when demonstrating what makes up the Natufian samples.
Posted by Awale Ismail at 12:59 PM