Being more accurate about the substrates in Ethiopian Semitic

Several times in the past; I've stated that the Ethiopian Semitic languages have an Agaw/Central-Erythraeic substratum and while this is quite true for the likes of Amharic, Argobba and Tigrinya... It's not entirely true for Harari, the Gurage languages & Tigre. 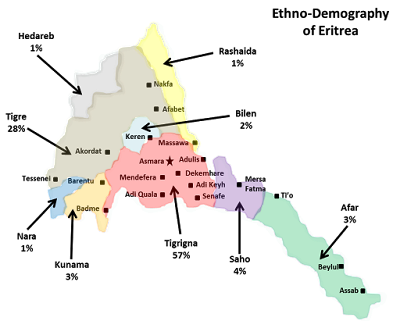 Tigres, unlike other Ethiopian Semitic speakers, were not historically a predominantly sedentary highland farmer population but were instead lowland semi-nomadic pastoralists similar to many Bejas, Sahos, Afars & Somalis. Alongside this, their language doesn't have a Central Erythraeic substratum but a Beja/North-Erythraeic substratum which implies that some of their ancestors and predecessors were most likely Beja speaking semi-nomads. [3]

In fact, a people in Eritrea and Sudan called the "Beni-Amer" are often understood to be a mixture between Bejas and Tigres and will speak either both languages or one of the two, though they're often considered one of the tribes of the Beja.


And, as I've pointed out in the past, a good amount of the peoples on what is now the Eritrean coastline were seemingly referred to by the Greco-Romans essentially as "Barbaroi" (non-Greek speakers) of some sort or other whilst their seemingly pastoralist life-style was sometimes alluded to. These peoples at one point, unlike the Barbaroi in North-Central Somalia who seemed largely independent, were seemingly under the control of the Aksumite Monarch and even "policed" the shores of the Eritrean coastline on his behalf:

"One Metrodorus, a philosopher, is said to have penetrated to further India in order to view places and see the world. Inspired by his example, one Meropius, a philosopher of Tyre, wished to visit India with a similar object, taking with him two small boys who were related to him and whom he was educating in humane studies. The younger of these was called Aedesius, the other Frumentius. When, having seen and taken note of what his soul fed upon, the philosopher had begun to return, the ship, on which he traveled put in for water or some other necessary at a certain port. It is the custom of the Barbaroi of these parts that, if ever the neighbouring tribes should report that their treaty with the Romans is broken, all Romans found among them should be massacred. The philosopher's ship was boarded; all with himself were put to the sword. The boys were found studying under a tree and preparing their lessons, and, preserved by the mercy of the barbaroi, were taken to the king. He made one of them, Aedesius, his cupbearer. Frumentius, whom he had perceived to be sagacious and prudent, he made his treasurer and secretary. Therefore they were held in great honour and affection by the king."[1]

Whether or not they're linguistically the "descendants" of these peoples is rather irrelevant, in life-style and the areas they inhabit; modern Tigres, Bejas, Sahos and Afars on the Eritrean coast are essentially the successors of these tribes and most likely, in some great part or entirely, descended from them.

The other group are speakers within the Harari and Gurage groupings of "Southern Ethiopian Semitic" whose languages actually have a Sidamic substratum. By Sidamic I mean "Highland East Erythraeic" which is a subbranch of East Erythraeic alongside Lowland East Erythraeic, the latter being the node Oromo, Somali, Afar and Saho belong to.

This makes sense given that the speakers of the various Gurage languages have seemingly lived in the Central-South Ethiopian Highlands for quite a long time, to a point where their languages have acquired rather pronounced influences from the local Erythraeic languages:

"Sidamo is the substratum language of the Gurage speaking region. Sidamo influenced the Gurage cluster in the phonology, morphology, syntax, and mainly in the vocabulary."" [4]

Even their dwellings/huts which are pictured above are more similar to those of close-by Oromos and Sidamic speakers, in my humble opinion, than to those of Amharas or Tigrinyas. They also look to lack Hidmo type dwellings (some Hidmos) which were historically found among Tigrinya speakers alongside round-huts which seems somewhat representative of how Aksumite farmer peasantry (what would've been the majority of the populace) might have lived in:

"Some clay models of houses survive which illustrate the architectural style of the smaller
Aksumite dwellings. A round hut, with a conical roof thatched in layers, and a rectangular doorway, is one type from Hawelti (de Contenson 1963ii: pl. XXXVII, b-c). A second type from Hawelti is rectangular, the doors and windows also rectangular, with a roof supported by beams whose `monkey-head' ends can be seen below the eaves. The roof has a small parapet and there is a waterspout to drain it (de Contenson 1963ii: pl. XXXVIII-XXXIX)." [1]

Granted, Amharas historically tended to lack this type of dwelling as well, from what I've seen; and, for at least the last 300-500 years or possibly more, look to have mostly inhabited some form of round-hut, whether wattle & daub or mud-mortared stone in construction. [note] Unlike Argobbas (their close linguistic relatives in a supposed "Amhara-Argobba" linguistic node) who do have some form of pseudo-Hidmo type dwellings alongside some huts to this very day.

Aside from this, the Gurage folk also look to display numerous cultural traits shared with the local Erythraeic speakers of Central-South Ethiopia such as an apparent historic presence of Waaq worship (Sky-God seemingly worshiped by many pre-Islamic Somalis, Afars & Sidamic speakers as well even some Oromos today) along with a strong presence of Muslims to this day given that at least one of the Medieval Muslim polities of Ethiopia's hinterland was likely "Gurage" in origin and a neighbor to the likes of the Sidamic speaking Hadiya polity.

The final group in question are intriguingly Adares/Hararis whose language seems to form a node with the East-Gurage languages called "Harari-East Gurage"; they are a people who've, at least for the last ~300-500 years, inhabited the town of Harar in Eastern Ethiopia (East Hararghe) which, around the mid-1800s, had a population somewhat below ~15,000 people:

"During his visit in the 19th century (1854), Richard F. Burton describes the town as having roughly 8,000 inhabitants with 2,500 of these being Hararis, 2,500 being Somalis and 3,000 being Bedouins who come and go. Though in this case, "Bedouin" is simply a term for nomads in the region whether they were Somalis, Afars or Oromos and doesn't necessarily connote an Arab origin. At this point in time, predating the conquest of Harar by Menelik II, there was no mention of Oromo, Amhara, Tigray-Tigrinya or Gurage residents who are now common in the town whilst Hararis and Somalis who are now minorities looked to be the bulk of the population at the time." [note] [2]

You'll probably see several at times outlandish claims about how old the town is but, as far as I've noticed through actual evidence for the time being, the earliest mentions of the town that I've seen only really date to the early 1500s during which case it's historic sections weren't seemingly as well-built as they are now or during the mid-1800s (it's surrounding wall wasn't built until later into the 1500s, for example). Richard F. Burton, who visited during the mid-1800s, is perhaps more diminishing of its early past than I'd be though:

"Harar was a mere mass of Bedouin villages during the reign of Mohammed Gragne, the “left-handed”" [2]

It probably existed before the 1500s but as a much smaller and more irrelevant settlement. Granted, Harar was never truly that big historically. It's importance was as a town of Islamic learning, basket weaving, textiles and trade but it wasn't exactly some sort of pre-modern "Metropolis".

But that's not what's interesting here... What's intriguing is that the language of the local Adares/Hararis has a Sidamic substrate the same way the various Gurage languages do. Enrico Cerulli was one of the first to discover this many years ago and it seems to be common wisdom at this point. Although, what's extra-intriguing is that he suggested the prior inhabitants of the area where Adares/Hararis live now were Sidamic speakers and that the Ethiopian Semitic language was grafted onto theirs as they were assimilated.

I find it a bit implausible that Sidamic speakers lived that deep into Eastern Ethiopia and so close to Northwestern Somalia. Though I suppose it's not impossible prior to the spread of the Oromo people. Nevertheless, it's more likely, to me, that the linguistic predecessors of Adares/Hararis perhaps lived where the Gurage peoples do and acquired their substrate there then moved to East Hararghe to find people mostly like Somalis but I suppose one can't be absolutely sure. 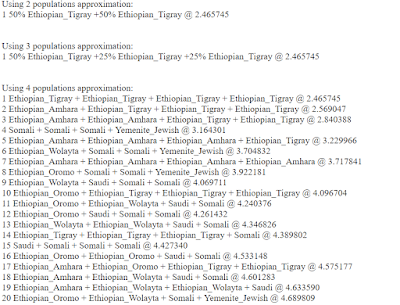 I've encountered the autosomal DNA results of at least two Hararis who were tested via 23andme and one was, oddly, a distant relative of mine and, aside from being 1/8 Pakistani (paternal great grandfather), his Horn African side seemed somewhat like a crossing between Somalis and Tigrinyas. The other fellow, as is visible above, seemed essentially identical to your average Tigrinya.

Not exactly what I'd expect from people who might be predominantly of Central-South Ethiopian origins (one might expect higher levels of Ari Blacksmith-like ancestry? [note]). Or perhaps it implies, as some prior indications might have, that Sidamic speakers are very similar to Northern Ethiopian Highlanders from a genetic perspective.

At any rate, all of these little details I'm getting into now are for another time, the point of this post was outlining that not all of the Ethiopian Semitic languages chiefly have Agaw/Central-Erythraeic substrates the way Tigrinya & Amharic do. Harari and the Gurage languages have a Sidamic substratum whilst Tigre has a North-Erythraeic/Beja substratum, for instance.


1. Aksum: An African Civilization of Late Antiquity, by Stuart Munro-Hay

3. The Semitic languages, by Robert Hetzron

1. If anyone has access to Sidamo, Alaba, Kembatta or any other such Sidamic speaker genome; sharing its results would be quite appreciated, same goes for Harari or even Tigre results (granted, I've seen a number of what look to be Tigre results already).

2. I edited the text from Munro-Hay's book to say "Barbaroi" instead of "Barbarian" as the English word "Barbarian" is a poor translation of what Greco-Roman terms such as "Barbaros" (βάρβαρος), "Barbaroi" and so on actually meant: [-] [-]

3. This is an old post I largely prepared almost 7 months ago but never got around to finishing up the last few details for and posting so apologies if anything at all seems vaguely outdated though it mostly looks tip-top to my eyes now.
Posted by Awale Ismail at 6:45 PM