The earliest Modern Humans to leave Africa mostly died out?

There's a new study out with some very intriguing genetic implications that have been somewhat implied in the past which is that there was (or were) a much earlier dispersal(s) out of Africa by Anatomically Modern Humans (Homo Sapien Sapiens):

But one important detail pointed out by this study that is escaping some people aware of it is the following: 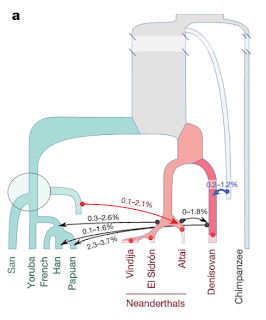 "However, it is clear that the source of the gene flow is a population equally related to present-day Africans and non-Africans (Extended Data Fig. 3). We conclude that the introgressing population diverged from other modern human populations before or shortly after the split between the ancestors of San and other Africans (Fig. 3a), which occurred approximately 200,000 years ago."

What they've found is that the hypothetical Homo Sapien Sapien population responsible for this admixture into those Neanderthals diverged from the ancestors of all Modern Humans (San & Yoruba included) well over 150,000 years ago so these people were not ancestral to modern Out-of-Africa/Eurasian populations to the exclusion of African populations like Yorubas and they probably did mostly die out whilst current Out-of-Africa populations seem like they're descended from later migrations out of Africa.

There have long been theories about Eastern Non-Africans like Australo-Melanesians tracing some of their ancestry to people who may have left Africa before the OoA migration (or migrations) mostly responsible for modern OoA populations, I do wonder if there is any truth to that.

For a while now, a friend has been mentioning a forthcoming uniparental study on Eritrea to me and just recently he got his hands on its abstract (I'm not sharing all of it but just some of it):


"Eritrea is strategically located at the eastern part of the African Sahel belt over what is believed to be the original scene of modern humans’ evolution and dispersal. The country’s peculiarity is also reflected in the presence of nine ethno-linguistic populations that speak Cushitic, Semitic and Eastern Sudanic languages, makes it all interesting in addressing some of the significant questions pertaining to history of human expansion within and beyond the African landscape. Major Y chromosome haplogroups A (24.73%), B (7.52%), E (46.24%) and J (21.51%) were detected in all Eritrean samples. Further high-resolution analysis of the macrohaplogroups resulted in high frequency of A-M13, E-V32 and J-P58 with different proportions found in the populations analyzed to indicate the prehistoric and historic demography of the populations."

I'll hold back on any comments until we get the full-paper but I must say... I'm extremely excited at the idea of comprehensive mtDNA data for ethnic groups like Afars, Sahos and Tigres.

1. Analysis of Mitochondrial DNA and Y chromosome of Extant Eritrean Populations and its Implication to the Prehistoric Genetic Legacy of Eastern Africa, Gebremeskel et al.
Posted by Awale Ismail at 7:39 PM 5 comments: 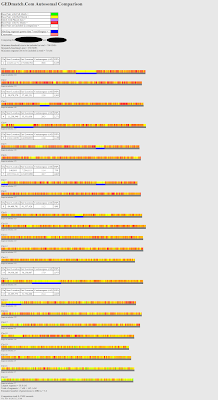 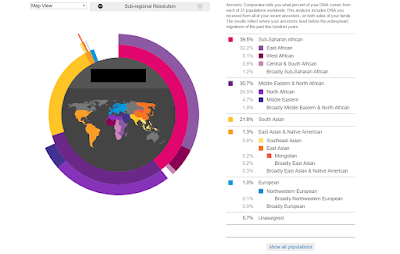 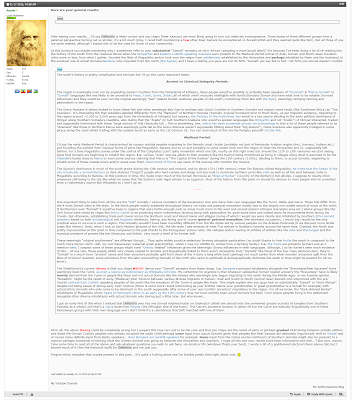 Posted by Awale Ismail at 10:20 AM No comments:

Admixture into and within Sub-Saharan Africa

A new study is out on Africa, and while there unfortunately aren't any new ancient genomes or even many new samples from what I've noticed, it's pretty hulking and while some of it, after having sifted through it, seems a little lackluster; it does have some interesting things to share such as the following:

"To quantify the extent of the genetic difference between groups we used two different metrics. First, we used the classical measure FST [Hudson et al., 1992; Bhatia et al., 2013] which measures the differentiation in allele frequencies between populations. It can be thought of as measuring the proportion of the heterozygosity at SNPs explained by the group labels. The second metric uses the similarity in copying patterns between two groups to estimate the total variation difference (TVD) at the haplotypic level...

...When compared to non-African populations, FST measured at our integrated set of SNPs is relatively low between many groups from West, Central, and East Africa (yellows on the upper right triangle), whereas TVD in the same populations can reveal haplotypic differences as strong as between Europe and Asia (pink and purples in lower left triangle). For example, the Chonyi from Kenya have relatively low FST but high TVD with West African groups, like the Jola (Chonyi-Jola FST = 0.019; Chonyi-Jola TVD = 0.803) suggesting that, whilst allele frequency differences between the two populations are relatively low, when we compare the populations’ ancestry vectors, the haplotypic differences are some the strongest between sub-Saharan groups."

It's interesting that for various African populations, Fst, which measures differences in allele frequencies, is not as useful for measuring divergence as it is for Eurasian / Out-of-Africa populations who've suffered through lower population sizes in early Human pre-history (+ dips like the "Eurasian-bottleneck") which were more conducive to genetic drift. For African populations, like the "Khoisan" for example, they've had larger population sizes throughout a good chunk of Human pre-history and have maintained greater genetic diversity as a result: 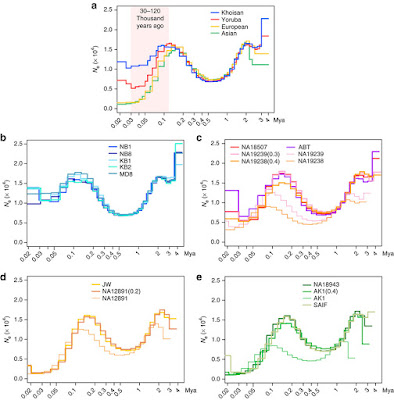 For these sorts of populations, it seems that haplotypic differences and Haplogroup divergence dating (like formation dates for E-V95, E-M329 and E-M215) is much more relevant to seeing how divergent they are. I.e. both these methods would imply that the African element in Somalis and Habeshas diverged from the African element in Yorubas roughly ~40,000 years ago.

That's a time-depth comparable to when the shared Homo Sapien Sapien ancestors of Eastern Non-
Africans and the non-Basal Eurasian ancestors of Europeans diverged.

1. Admixture into and within sub-Saharan Africa, Busby et al.

2. Khoisan hunter-gatherers have been the largest population throughout most of modern-human demographic history, Kim et al.

My quick delving into this matter at Anthrogenica
Posted by Awale Ismail at 4:17 AM No comments: