In my very first blog post where I attacked the concept of racialism I made some statements about population genetics and well... I've learned more as I hope many who read this blog and the papers I cite have since. In this post I'd like to correct some inaccuracies in some of things I posted practically 6 months ago (it's surreal that it's been that long).

I've actually corrected these inaccuracies with my blog posts over the last several months (my second ever post in fact did make a point of adding new information to what I'd posted in my first one about Early European Farmers) but I'd like to touch upon them again but this time on their own rather quickly in this blog post. 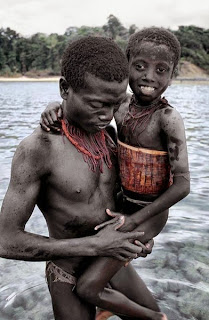 I originally made the statement that Eastern Non-Africans/ East Eurasians like the Andamanese man to the right and his child were (alongside Australian Aborigines and Pacific Islanders) more distant from Africans like Niger-Congo speaking Africans and non-West Eurasian admixed East Africans than Europeans and West Asians were.

Well, some indeed are; at least in the case of Australian Aborigines and Papuans who have notable levels of Denisovan admixture which is presumed to be the cause for why they're more distinct from African populations like the ones I mentioned than populations like Europeans are. [1]

And I indeed was on the mark when I said that the man to the right and his son are full-blown Eurasians (of an 'Out of Africa' population) and don't have any post-Out of Africa African ancestry while many West Eurasians and North Africans such as Arab Levantines, Peninsula Arabians, Egyptians, Moroccans and so on do indeed have actual post Out of Africa African admixture so in this case; many West Asians and North Africans are closer to Africans than Eastern Non-Africans are. [2] [3] [4] However the claims I made that West Eurasians (Europeans + West Asians) as a whole thanks to Basal Eurasian are closer to Africans than Eastern Non-Africans are was not entirely correct as I was depending on Fst values to make these assumptions and I'll get into that more with the Basal Eurasian section below.

As that table above demonstrates; Papuans are more distinct/ varied from Yorubans than Frenchman and Han Chinese are, that is indeed true. [1] However as I mentioned in my East Eurasians focused post in the past; this is likely mostly due to them having their levels of Denisovan admixture. Not all non-East Asian East Eurasians (those who may lack the higher levels of Denisovan admixture found in Australian Aborigines and Papuans) are as distant as Papuans are from Niger-Congo speaking Africans, instead, I wager their variance from Yorubans would be comparable to what you see for the Frenchman and the Han above. 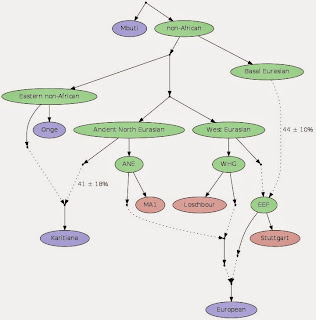 no real inaccuracies that swayed away from the peer-reviewed data I was depending on from what I recall. However in my first blog post I made the claim that Europeans for example for having Basal Eurasian admixture were closer to East Africans (those of a non-Eurasian admixed variety) and Niger-Congo speaking Africans than East Eurasians/ Eastern Non-Africans are.

First off, Basal Eurasian isn't exactly what I said it was in my very first post but is what I said it was in my actual long post dedicated to it though even in my first post I mentioned fervently what  those in the field of academia more or less made of it for now (Out of Africa isolate). It's not a component (for the time being) with a real African affinity as I said with my first post but instead as I said in its own post; at best a Quasi-African component. It is closer to the East African origin point ("Non-African" in the diagram and sometimes dubbed "Proto-Eurasian") of all Out-of-Africa (OoA) populations (Eurasians, Pacific Islanders, Native Americans etc.) than other Eurasian/ OoA components are; it's highly divergent from all other Eurasian components and is seemingly more Basal to them than Ust-Ishim which Haak et al. finds to be basal to all so far discovered Eurasian ancestral components except for Basal Eurasian. [5]

However it ultimately lacks any confirmed African affinity. It is clearly somehow still grounded in its Eurasian-ness, as it's clearly still a Eurasian component but again (as my post on it says); it's a statistical concept for now and we don't really have full knowledge of what it is. We may hopefully grasp it completely once we have ancient genomes from West Asia but for now; the academia are cautiously and understandably sticking to what their current data seems to be saying; that it's an Out-of-Africa isolate the way I explained it in my first post. [6] [7] 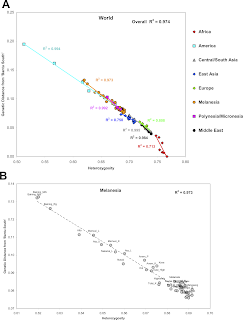 Also; as I explained in my actual post about Basal Eurasian; Fst values aren't to be taken too seriously as a real measure of "genetic distance" / variance at least in some cases. And Fst values were what I was mainly depending on for my assumption that Europeans for example were closer to African populations than East Eurasians (Han, Papuans etc.) were.

Fst values like the ones represented in the diagram to the left of this text [8]; can be influenced by a whole foray of variables not truly indicative of a population's real variation level from another population. For example it can be skewed by a heightened level of genetic drift  and some such. And as an old friend put it:

"Fst looks at the variation between entire groups, which is why more isolated East Asians will have an increased distance to others, like e.g. Africans. This effect is the most pronounced in Native Americans, who tend to be the most divergent from Africans with respect to Fst distance."

A real measure of the variance between groups would be better and that is represented in the table I shared earlier showing you Papuans, Neanderthals, Han and the like... In that case Europeans don't truly show an African pull of sorts and Basal Eurasian's Out-of-Africa-ness seems rather solid for now. Though as I stated in the East African cluster's blog post; groups with ancient East African ancestry in Africa like Niger-Congo speakers (as per their mtDNA markers for example) do demonstrate a greater pull/ similarity toward Eurasians than groups that would mostly lack such ancestry like non-Bantu and East African admixed San.

To be honest; I've encountered a lot of people who've been fooled by Fst values/ "Fst distance"; using as a real measure of the distance between populations; they're in truth not to be too relied upon for that though they can be quite useful in some cases.

In essence; the only real mistake I'm trying to correct here is one that surfaced through me making too much of Fst distances and not seeing more reliable measures of the variance between populations and that lead me to make the still true statement that for example Papuans are more distant from Yorubans than Norwegians are but it's not because of Basal Eurasian being in Norwegians but most likely because Papuans are last I checked about ~5% Denisovan while Norwegians aren't (but not all East Eurasians are more distant from Africans than Europeans are. F.e. the Han's variation from them is comparable to that of a European population like the French) Basal Eurasian is a highly divergent ancestral component that we don't know everything about just yet but it doesn't make West Eurasians any closer to Africans than Eastern Non-Africans (East Eurasians) are and it's at best Quasi-African at least for its close-ness to the very base of Eurasians which is ultimately very ancient East African in origin as per the Haplogroup evidence (Y-DNA an mtDNA) and the very real affinity the East African component has for Eurasians.

Beyond that; I can't think of anything else that truly needs correcting especially if you've been keeping up with my other blog posts since that very first one. So... Take care and I hope you enjoy this blog.

5. Massive migration from the steppe is a source for Indo-European languages in Europe, Haak et al. 2015

1.  I made this post mostly because I noticed that my very first blog post gets a good amount of my traffic and well... It's much more important that you all actually read the other posts where I actually share information on various populations and so on rather than sifting through that old post where I was making a political statement more than anything (not really my forte at any rate) and well; I always advise you to consult the papers I link you to.

You're not supposed to take my word for anything. My blog posts just like any book, Wikipedia article or even paper are not reliable on their own. Instead I advise you to always read the sources I or other sources share and the data we share as well and add that on top what we're saying to make your final judgments. Always think for yourself...

But I assure you; as the making of this post demonstrates-> I take great pains to make sure I share the most objective and accurate information I possibly can on the subjects I touch upon and try to make sure you yourself are informed through your own research by sharing my various credible sources.

2. The Hodgson et al. paper I shared has flaws as I've touched upon in the past but it shows you how Egyptians and Arabians have African admixture so that was the point in sharing it as a source.
Posted by Awale Ismail at 4:46 PM