Copts: an example of Pre-Islamic and Arab conquest Egypt? 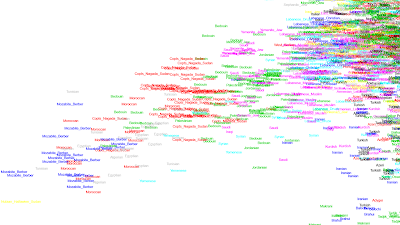 What you see above in the middle & in red are the Nagada Copts (residents of Khartoum, Sudan) from the recent autosomal DNA study on Sudan (Dobon et al.). That's them in a Global PCA (Principal Component Analysis) made by the author of Eurogenes upon my request. [1] 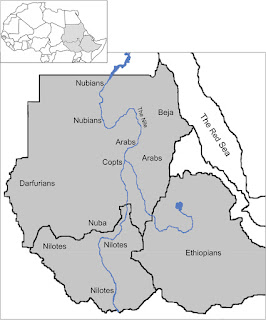 They interestingly look to be more Eurasian / West Eurasian / West Asian than their Muslim Egyptian counterparts ("Egyptian" samples). As you can see in the Global PCA, they pull more north toward West Asians and straddle between Muslim Egyptians and Palestinians. Palestinians are about ~5 to 10% African admixed (I'm speaking of components like the East African cluster and perhaps "Niger-Congo" here) while Muslim Egyptians are about ~20 to 25% on average, much like Northwest Africans whom they cluster close & who are known to be at that level. [2] 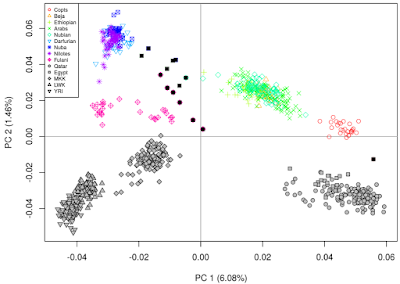 You can see in the new study's own PCA above that the data is more or less the same, the Copt samples pull more to the right on the X axis like Qataris while Egyptians pull more to the left; they once again clearly prove more West Eurasian / West Asian than their Muslim counterparts.

Muslim Egyptians often show small trace levels of Ancient North Eurasian ancestry (ANE), if I recall correctly though; their region is mostly a near dead zone for this kind of ancestry especially when you go south to the Horn and now seemingly even North Sudan where there is more or less no ANE ancestry about. The situation is the same to their west where Maghrebis / Northwest Africans seem to lack ANE input altogether.

Though Maghrebis have Western European Hunter-Gatherer (WHG) ancestry as has been noticed via Eurogenes K=8 and even Lazaridis et al.'s old ADMIXTURE analysis from 2013. [3]

Muslim Egyptians and Copts both show trace or low levels of WHG ancestry however there's really no way of knowing if this is real WHG ancestry or perhaps something very ancient that could have come out of West Asia similar to WHG (many I know tend to refer to this as "UHG/Unknown Hunter-Gatherer") so this WHG might not entirely be real though some of it could be.

At any rate it seems to me as though these Nagada Copts, the descendants of migrants who came from Egypt within the last 2 centuries as Dobon et al. notes, might honestly be representative of Copts as a whole. I say this because I have seen a random Egyptian Copt from Upper Egypt's results and she came out quite similar to them. No ANE, low WHG levels, ~15% East African / Sub-Saharan African and clearly more West Eurasian than Egyptians, in fact from what I've heard of her results and seen, she seems quite identical to these samples.

Her results from Eurogenes K=7:

The results above are based on Eurogenes K=7 which was somewhat less fine tuned than
K=8 especially at times with its WHG estimates. It would give Northwest Africans something along the lines of 20-30% WHG ancestry which is ridiculous, those are in fact Italic & Greek levels of WHG ancestry. So her "WHG" score in those above results is most likely quite inflated.

Like LifeisDandy in Eurogenes K=7, their "Sub-Saharan African" ancestry seems to be solely East African and not at all Niger-Congo (sometimes referred to as "West-Central African") based. You can see this in Dobon et al.'s own ADMIXTURE analyses like with the following run at K=3 where Copts show none of the light blue Yoruba (YRI) component but the Egyptian samples do: 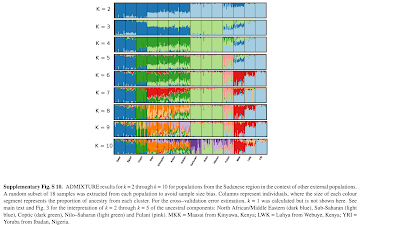 Now, the reason this is all actually interesting is because. as I've stated in the past, Christian and non-Western (Ashkenazim + Sephardim) or Northwest African (Maghrebim) Jews from West Asia's Arabized regions often come off as distinct from their Muslim counterparts to some degree and seem to have avoided waves of more recent admixture that's affected their Muslim counterparts or at least absorbed much less of it.

One can only for now imagine that this new Niger-Congo input that isn't present in the Christian and Jewish groups who at times look like isolates in their home regions or display some substructure when compared to their Muslim kinsman [4] might just be a legacy from The Arab Slave Trade?

At any rate, a good example of these newer waves of admixture especially in terms of newer African ancestry absorbed likely through the Slave Trade would be Yemenite Muslims and Yemenite Jews. 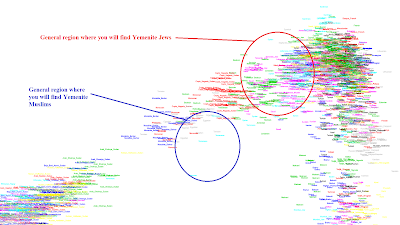 Most Yemenite Muslims I've encountered either in studies or outside of them tend to come out with North African levels of African admixture, at a level of ~15-25% as you can see with how they plot at the same level as Mozabites, Moroccans, Egyptians and so on with only one of those samples just ending up at the very south of the Nagada Copts.

Some Yemenite Muslims can indeed be about ~15% African in my experience, that isn't necessarily abnormal. But as a whole they're clearly more admixed than Saudis, Qataris and so on (fellow Arabians of the Peninsula). [5]

I'd go on and on but it's generally obvious that they avoided various forms of outside admixture (not just Niger-Congo admixture) that Yemenites of a Muslim extraction simply did not.

This perhaps seems to be the case with our new Copt samples as well. I personally wouldn't be too surprised if these Copts are a reliable genetic example of Christian and Late Period Egypt.  Iranians, Anatolians and Caucasians are very rich in Ancient North Eurasian ancestry and from glancing at this recent incredulous Bronze Age Ancient Genomes study on Eurasia; it seems the Caucasus was rich in ANE as far back as the Bronze Age, Anatolia and the Iranian Plateau likely were too in my humble opinion.

The point is, from what David says about the WHG and ANE levels in these Copts & even the levels LifeisDandy shows; it's clear that they really don't have Persian or Greek admixture. Persian or Iranian admixture would've likely brought with it notable ANE ancestry and Greek admixture would've brought with it much more notable and solid WHG ancestry (not negligible trace levels that might even be actual WHG admixture).

Although Bedouin admixture can't entirely be ruled out as one friend has noted. Many or most Arabian Bedouin do not show ANE or WHG ancestry in K=8, they're much like these Copts and mostly just look like a cross between East African/ Sub-Saharan ancestry (~5-15%) and ENF ancestry (the West Asian component that carriers Basal Eurasian with it) though some can show some Niger-Congo input.

Honestly, I think it's entirely possible that some of these ethno-religious isolates of West Asia do have influences likely owed to the Arab Conquest. Christians in the Levant do in fact show Arabian admixture at a non-negligible level in some independent ADMIXTURE runs or studies. [6]

Nevertheless, these populations did seemingly avoid admixture their Muslim counterparts have endured (though sometimes not at all entirely) whether it be Peninsula Arabian admixture or African admixture most likely owed to the Slave Trade or some other events.


These Copts who are honestly just descended from Egyptian migrants who arrived to Sudan within the last 2 centuries (as this new Sudan autosomal DNA based study notes) & Egyptian Copts like "LifeisDandy" among others seem to keep to this pattern. They seem more West Eurasian than their Muslim counterparts, lack some outside input in them such as Niger-Congo admixture & are most likely a better representation of what Egypt was like genetically before its Islamization and Arabization.

But this is merely an assumption on my part based on how they're keeping to an already well-known pattern among the Christians & non-Western or Northwest African Jews of "The Middle East" (Assyrians, Lebanese Christians, Yemenite Jews etc.) who often to some degree even to geneticists seem to perhaps be a better representation of their region's pre-Islamic & pre-Arab conquest population. [7]

The way they lack Niger-Congo input exactly like Lebanese Christians & Yemenite Jews do whilst their Muslim counterparts (Lebanese Muslims, Yemenite Muslims and Egyptian Muslims) actually have such admixture is especially compelling. 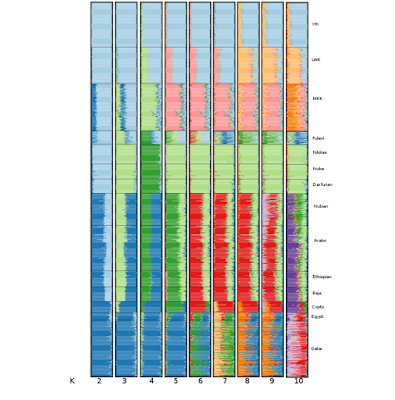 That alone to me establishes that they've at least avoided some admixture from the outside but the question as to whether or not these Copts lack Peninsula Arabian influences is still up in the air from what I can tell. Frankly, I'm not an expert on Egyptian autosomal DNA data and don't know if Egyptians Muslims themselves lack Arabian input or have any.

Granted, from looking at the ADMIXTURE results from Dobon et al. above; one is left to wonder given that Egyptians at K=10 and several other Ks seem more similar to Qataris than Copts. But that can be a bit skewed in that these new Copt samples are forming their own mixed component (similar to how some Mozabites or Tunisian Berbers form a "Maghrebi" component or Somalis form components like "Ethio-Somali") from K=5 and onward, but you'd expect the Egyptian samples to show more of this component than they are in my humble opinion.

7. Genetic evidence for an origin of the Armenians from Bronze Age mixing of multiple populations, Haber et al.

1. For the record, it has been known for a while now that Yemenite Jews are pretty much mostly native to the Arabian Peninsula, it's pretty clear that they aren't a Levantine migrant group that came to Arabia and mixed with the locals too as they don't share IBD segments with other Jews like Iraqi or Sephardi Jews while these Jews do share IBD segments with one another. [-]

2. To touch upon that Lazaridis et al. ADMIXTURE run I linked you to; you can see that Northwest Africans like Mozabites and Tunisians have WHG admixture by observing K=16 in that run for example where Northwest Africans show the blue WHG/ Loschbour based component alongside EEF (pink).

3. I referenced Hodgson et al. ("[5]") when I mentioned that Yemenite Muslims are more African admixed than Saudis and Qataris because you can view that data in that study's ADMIXTURE analysis. (names of the components)

4. My old post on ANE's spread that I linked to in this post needs to be updated a bit/ followed up perhaps with a newer post giving everyone a clearer image of what seems to for now be Ancient North Eurasian ancestry's spread across the world. Also, populations like Negevite Bedouins and Copts likely do have some negligible ANE-related ancestry owed to Caucasus Hunter-Gatherer-related admixture (which they show).

6. Keep in mind that Coptic is a dead language (only used for liturgy) and that Copts are indeed simply Christian Egyptian Arabic speakers just like Maronites in Lebanon don't really speak Aramaic anymore.

A new variant of the Pan-Northeast Africa PCA where Tunisians, Moroccans, Mozabites and Morccan Jews have been added. A mapping of the group clusters in it I made.

David Wesolowski, the author of Eurogenes.
Posted by Awale Ismail at 3:32 AM