This new paper which goes quite a bit in Haplogroup E3b / E1b1b / E-M215 has a lot one could touch upon and frankly; Uniparental (Y-DNA & mtDNA) data isn't my forte. [1] My knowledge of them is quite basic or at least not comparable to how much I know when it comes to autosomal DNA based data. 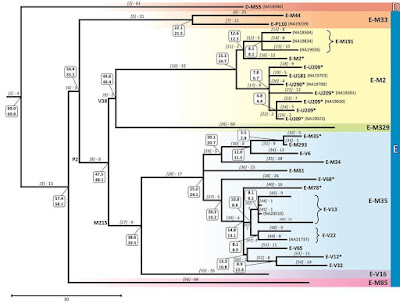 But some meager comments on my layman part wouldn't hurt; specifically pertaining to some of the data we now have on the E-M215 lineages carried by various Cushitic speaking populations (or those with substantial Cushitic ancestry) in this paper.


The above chart is basically a duplication of the one Ethio-Helix' author made over at his blog when he touched upon this paper.

Many interesting things were discussed in the comment section of his blog and while I'm not necessarily recommending this forum as while it has some great and stellar to nice members, it is also overrun with a lot of troll-ish, bigoted to unstable types; there was some great back and forth about this paper on it here.

Many things are quite interesting here like the fact that E-M293* essentially seems to be tied to and likely spread by South Cushites as it and E-V32 & E-V22 are the only E-M215 lineages found in this paper's Southeast African populations all of whom are known to have substantial Cushitic ancestry mostly to entirely via what seemed to be South Cushitic speakers.


It's also in the past been tied to the spread of pastoralism across Southeast Africa & Southern [2], pastoralism being something South Cushites seemingly had a great part in spreading across the region.

However it's not entirely likely that E-V32 and E-V22 could be owed to South Cushites for reasons a friend noted to me just recently when I asked if they could be:


"Possible, but doubtful considering the South Cushites from Tanzania sampled by Hirbo (and the Datog, who are mostly of South Cushitic ancestry) lack E-V32 completely. Iraqw have some V12* though. These Tanzanians don't seem bottlenecked since they have the highest M293 diversity, so if proto-South Cushites had some V32, you would expect it to be preserved in the Tanzanians.

Turkana are Northwest Kenyans and Maasai migrated from there recently, so it seems plausible that they have some East Cushitic admixture, which could explain the V32. Or it could be from their Nilo-Saharan ancestry, although V32 is mostly found in Western Sudan."

Now, given the uniparental data of groups like Iraqw who are actual modern South Cushitic speakers; it seems that South Cushites were paternally E-M215 (E1b1b / E3b) & T? [3] [4]

The current lack of this Haplogroup among substantially South Cushitic admixed groups and even groups like Iraqws who currently speak a South Cushitic language is puzzling to me to say the least...

It's also remarkable that all 94 of this paper's Saho samples are pretty much E-M215 carriers and could be 2% J1 or A-M13 or T or what have you when Afars actually tend to show a notable amount of J1, A-M13 and T:
More study will need to be conducted but for now it seems rather evident that despite their very close linguistic ties where Saho & Afar are often classified under one rather close "Saho-Afar" subbranch of Lowland East Cushitic; there's a pretty stark difference in terms of Y-DNA lineages between these two groups so far.

Other than that I find the amount of non-E-M215 in those Djiboutian Somalis quite interesting as this in my humble opinion means they're most likely predominantly Haplogroup T carriers.


Somalis from Djibouti are mostly of the Dir clan (of the Issa sub-clan to be exact) and so far in Ethiopia and such; Dir clan Somalis tend to be mostly T carriers and something like 20-30% E-V32 [5] while the percentages are often the inverse for other Somalis like various Darods who tend to be 70-80% E-V32 and 20-30% (or less) T [5] with a small minority of J1 and A-M13 carriers.

Otherwise, I don't have too many other things to note that I possibly didn't note in this forum thread. I recommend going over to Ethio-Helix' blog post about this study and engaging in discussions about it there.

The thing is; I don't tend to touch upon Haplogroups in great detail because 1) I'm not that knowledgeable when it comes to them and 2) Ethio-Helix does enough when it comes to Uniparental data that me doing so would just translate into me just re-hashing everything he's already posted and adding some speculation here and there.

Nevertheless, I thought some of these things I and some others noticed would be interesting to mention here so enjoy and of course; do read the actual study if you're truly interested in all this.

2. Although it's been brought to my attention via the massive Hirbo thesis that Iraqw do show E-V22 so it's rather E-V32 showing up in some of these Southeast African Cushitic admixed groups that perhaps has more of a dubious origin.