I've often shared results from the Eurogenes K=8 admixture run where the "Early Neolithic Farmer / Near Eastern"component turns up or perhaps referred to pre-historic "West Asian" ancestry and I'd like to take this opportunity to quickly explain what this component is. 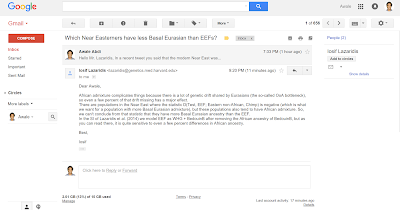 It's simply as Iosif Lazaridis of Harvard Med ultimately says in that email reply to me above. It's what you would get if you account for the Western European Hunter-Gatherer-related ancestry in Early European Farmers or what looks to be the non-African ancestry in the Bedouin B samples often tossed around between various studies who are Bedouins from Negev.

Long story short; Farmers from West Asia migrated to Europe during the Neolithic and intermixed with the Hunter-Gatherer groups present there like what Lazaridis et al. 2013-2014 [1] dubs "Western European Hunter-Gatherers".

These farmers as we've recently learned through observing some low coverage data on a Neolithic Anatolian Farmer; might have been carrying some Western European Hunter-Gatherer-related ancestry before entering Europe and then acquired more of such ancestry within Europe itself.


(Above are groups this component tends to peak in)

For the time being it's a shaky model for what certain parts of West Asia among other neighboring regions might have predominantly looked like in terms of Non-African ancestry.

It's shaky because it's ultimately based around the non-African ancestry in Bedouin Bs who seem to lack Ancient North Eurasian / Mal'ta boy-related ancestry or the kind of Western European Hunter-Gatherer-related ancestry that appears in Early European Farmers. [note]

The component seems to carry an excess of the illusive Basal Eurasian component along with what in my humble opinion is probably ancestry related to groups like Western European Hunter-Gatherers but honestly; we'll need ancient DNA data from West Asia, North Africa & perhaps even East Africa to fully grasp "Early Neolithic Farmer" or "Near Eastern" as well as Basal Eurasian.

For now any parties curious about this component should just understand it for being what is described above and as being a "West Eurasian" component seemingly native to West Asia that's been found in pre-historic groups like Early European Farmers and Pontic-Caspian Steppe pastoralists such as the Yamnaya. [2]

Its current modern spread is far and wide where it can be found in various distinct populations all over the world from Fulanis in the African Sahel to Tamils in the Indian subcontinent; signifying shared pre-historic ancestry presumably from West Asia or the general "Middle East" region between these numerous distinct Homo Sapien Sapien populations.

We'll know more someday and have a much keener understanding of pre-historic West Asia and neighboring regions once we have adequate ancient DNA samples from the region and other regions adjacent to it but for now; that's mostly all that needs grasping in respect to this component and what it is.