The plot thickens yet again

Well, now we seem to have the Haak et al. ~ Mathieson et al. "Armenian" proxies for the origins of Early Bronze Age Steppe folk in the flesh replacement in a new component mentioned in a new study and that would be "Caucasus Hunter-Gatherer".

Seems that two pre-historic Caucasian Hunter-gatherers ("Satsurblia" & "Kotias") touched on by a new paper (Jones et al.) are essentially the old "Caucasian~West Asian" ADMIXTURE component (which appeared in dual models as "Caucasus" & "Gedrosia") in the flesh as Dienekes would put it. 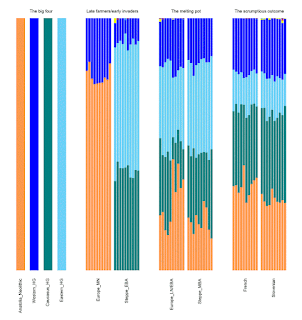 It also seems to be what people were looking for when theorizing about the hypothetical "teal" people in that Yamnayas according to Jones et al. can be modeled as "EHG + CHG" (EHG= Eastern European Hunter-Gatherer) although David Wesolowski over at Eurogenes seems to find that this model isn't perfect and that there may have been some excess WHG (WHG = Western European Hunter-Gatherer) related ancestry contributing to these Steppe pastoralists as well. 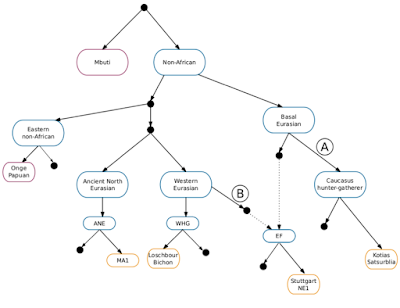 One odd detail from the paper is that it seems to be peddling this view that the component is essentially descended from a "basal lineage" and makes no real mention, if I recall correctly, of an affinity for MA-1 or EHG, something Razib Khan chews on over at his blog.

Like Razib, I don't really buy this model. This component is likely some sort of mixture / hybridization of something "EF/ENF/Near Eastern" like and something "ANE" related. It clearly has some great part in why various West Asian populations among others showed much of the "ANE" affinities they did in older runs based on derivatives of the now obsolete three-way model:

Yet some seem to be claiming it has no ANE-related affinities to it but perhaps at this point in the game with CHG, EHG and all these more recent pre-historic samples, "ANE" is moving farther and farther into redundancy in respect to West Eurasians along with some other groups at least.

I suppose my caution with my Ancient North Eurasian post was warranted, where I mentioned that whatever was making certain populations in South to South-Central Asia & West Asia look part "ANE" that wasn't EHG might just prove to be a different kind of Hunter-Gatherer component that merely shows strange affinities for Mal'ta boy and his kind or is extra-related to "ANEs" somehow or partially mixed with ancestry related to them.

My personal contention is that CHG is something Near Eastern related + something Ancient North Eurasian related but all I can say with any certainty is:


1. These simplistic mixture (this+this) models might be misguided and the truth may prove more complex with further study once Lazaridis and company release their analyses of these genomes & we have more and more new genomes.

3. Something about it sure is making various populations fit as part "ANE" and this "Near Eastern + ANE" model was the original image most had of "Caucasian" & "Teal" whose roles it has now annexed.

At any rate, the story of Europeans and other West Eurasians' geneses has definitely thickened in plot with Europeans now looking to have four heavily drifted (and divergent-ly admixed in some cases) pre-historic ancestral populations found for now in the ancient DNA record. 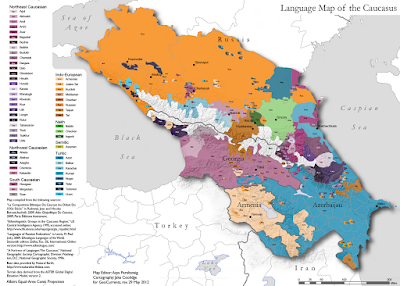 I'll of course be sitting back and waiting for further plot thickening like the understanding of "Basal Eurasian", the finding of yet more unique pre-historic H. Sapien populations and so on. Ancient DNA is an exciting business.

3. Massive migration from the steppe was a source for Indo-European languages in Europe, Haak et al.

Yamnaya has WHG-related ancestry not explained by EHG (?)
Posted by Awale Ismail at 1:09 AM