I hesitated to make this post as David made it himself adequately enough and you can check his post out for all the tree-mixes but it is worth-noting that even tree-mixes show that Natufians and even Neolithic Levantines have some African ancestry: 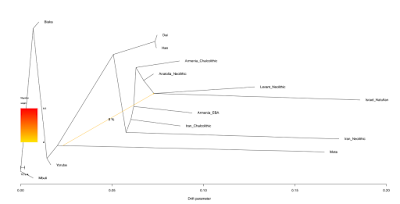 This is a strange puzzle, quite frankly. Especially given the Lazaridis et al. 2016 Pre-Print's claim below:


In fact, as David's found, formal stats don't imply that Natufians have African admixture the way these tree-mixes, ADMIXTURE & PCAs do:

The above shows that they don't have any "shift" toward Africans away from other pre-historic Eurasians and thus don't share any alleles with Africans that Neolithic Iranians (who don't seem to show such admixture in tree-mixes and such) or Neolithic Anatolians do not which is in line with what the Lazaridis Pre-Print was asserting.

It's quite strange because essentially all analyses other than D/f4 stats show that the Natufians in particular supposedly have African admixture. It's also interesting how the tree-mixes David's released show two migration edges (arrows) going toward the Neolithic Levantines and Natufians:

One tends to look more overtly African and comes in from either Mota's branch or, as it is above, from in-between Biakas and Yorubas whilst the other tends to sit between Mota and all the Eurasians present in the tree. David suggests that the latter is a sign of "Basal Eurasian", and it is interestingly the migration edge that tends to go directly into the Natufians themselves. The other seems more overtly African and tends to go to the root of both Natufians and Neolithic Levantines while being less significant.

We've had Natufian~Neolithic Levantine-like samples show African affinities via tree-mixes in the past such as Stuttgart (an Early European Farmer): 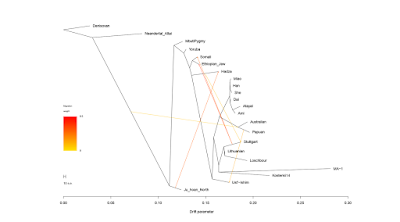 And interestingly; Stuttgart's African admixture in that tree-mix above (also made by David) looks Hadza-like which is interesting because of the similarity between Hadzas and Mota (see here). But, there aren't two migration edges or two distinct elements like the African samples present going into Stuttgart.

Perhaps it's a quirk of  Stuttgart's heightened WHG-related admixture in comparison to Neolithic Levantines and Natufians or perhaps the latter two groups of samples actually do have some African admixture alongside their Basal Eurasian ancestry and the formal stats and such are wrong? Or all of this, in all the tree-mixes, including the new ones; are caused by Basal Eurasian and we shouldn't make too much of this?

Though, it's worth noting that Stuttgart's PCA position does not imply a pull toward African populations when compared to various West Eurasians and North Africans. There is a slight pull in the case of Neolithic Levantines and a more overt one in the case of Natufians, however (see here). And, whilst I haven't seen the ADMIXTURE results of a Neolithic Levantine sample, unlike that one Natufian from earlier, Stuttgart clearly shows no African admixture via ADMIXTURE runs.

1. I said Stuttgart/Early European Farmers have Natufian-like ancestry because that's what this new Pre-print actually implies with it's ADMIXTURE run. The Neolithic Anatolian Farmers and Neolithic/Early European Farmers look like they're a mixture between the blue cluster which dominates Neolithic Levantines and Natufians (Epipaleolithic Levantines) and the red cluster which dominates "WHGs". The farmers who hit up Europe clearly seem more related to those in the Levant than those in Iran if that ADMIXTURE and mostly Pan-West Eurasia PCA are any indication.

3. At this point; ADMIXTURE & PCAs imply African admixture in these Natufian samples but the formal stats just aren't picking up on this which is odd. The formal stats impart that Africans don't share more alleles with Natufians when compared to other pre-historic Eurasians as this new Pre-Print asserts at one point.
Posted by Awale Ismail at 1:31 PM