The creator of the PuntDNAL ancestry project (Abdullahi Warsame) managed to convert one of the Natufian samples' raw data (I1072) into a .txt file [note] and it seems, as per his findings, that the sample is GG for the SLC24A5 gene's rs1426654 SNP.

I've somewhat gone over this before but that would mean he lacks the derived A allele for the SNP which is important in modern West Eurasians' de-pigmentation. It's responsible for 1/3 of the skin pigmentation difference between Europeans and mostly non-Eurasian admixed African populations.

Lacking it as well the derived alleles for SLC45A2's rs1891982 SNP is why the reconstruction of La Braña-1 above has him being rather pigmented/dark-skinned. Western European Hunter-Gatherers like him had the alleles required for light-eyes but not for light-skin: 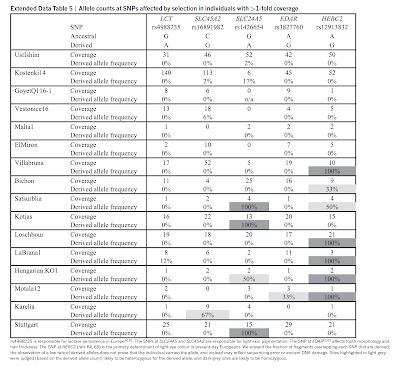 Anyway, if this Natufian is really GG for that SNP (he's most likely ancestral for SLC45A2's rs1891982 SNP as well), and none of this is caused by DNA damage and is quite legit, then it seems like this particular Natufian was an individual lacking in modern West Eurasians' de-pigmentation. No idea if the other samples are the same but they might be and it'd be pretty intriguing if they are.

What's even more interesting is that the Neolithic Levantines whose data I've managed to sift through (4 samples) are AA for SLC24A5's rs1426654 SNP, making them more similar to Western Neolithic Anatolians and Early European Farmers in this respect.

If this Natufian's result is truly legitimate and the other samples and numerous future Natufian samples prove to be just like him in this respect; it seems like something from outside the Levant brought the derived allele to the region as Caucasus Hunter-Gatherers carried it, Neolithic Iranians seemingly carried it and Western Neolithic Anatolians did as well. For Neolithic and not Epipaleolithic Levantines to carry it could mean an outside population brought it in perhaps from somewhere more north or east. But we'll see what future data on Natufians reveals.

I originally made a mistake in not noting that the early farmers (Neolithic Anatolians and Early European Farmers) did seemingly carry the derived allele in SLC45A2's rs1891982 SNP. They did seem to carry the derived (C) allele for this gene but at what look to be somewhat low frequencies (see here). I used to be under the incorrect impression that they didn't carry it. Apologies...
Posted by Awale Ismail at 9:22 PM