So, I asked David over at Eurogenes to run Somalis as a mixture between South Sudanese people and Natufians in order to see how well the model would fit using a formal statistical method like qpAdm and he got some pretty surprising results overall: 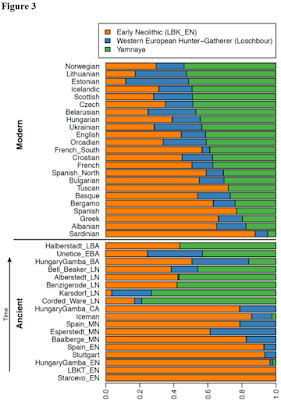 This oddly reminds me of some models the new Lazaridis et al. pre-print shared where they were asserting that Somalis were a mixture between Mota & population along the Iran_ChL→Levant_BA cline: 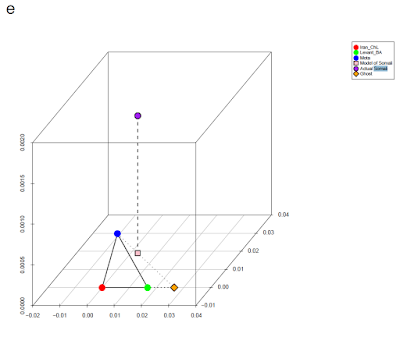 I didn't make much of the above at the time. For one, Mota is a poorer fit for Somalis' African ancestry than the South Sudanese (due to various reasons alluded to here), and it made little sense that Somalis' West Eurasian ancestry corresponded better with Bronze Age Levantines and Copper Age Iranians than Neolithic Levantines, for example. At least in my humble opinion. 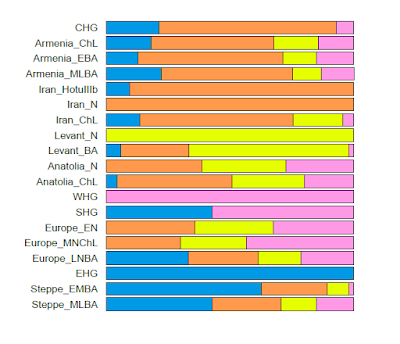 Future analyses and data will be needed but I should point out that some current ADMIXTURE runs don't seem entirely supportive of such a model but ADMIXTURE is not necessarily as precise as qpAdm can be.

For one, qpAdm is preferable because it outright allows you to take a Natufian and then a Neolithic Levantine and see which one you have a greater affinity for (mixture wise) but ADMIXTURE is a lot more messy in that it allows all of these clusters to form among various modern & pre-historic populations and could thus be more prone to producing perhaps more clunky results. Formal statistical methods like qpAdm also seem to be "drift resistant" / resistant to being skewed by recent genetic drift and can thus notice deeper ancestry better than ADMIXTURE to a certain degree.

But we should see what some other analyses say like d-stats and tree-mix. I'm skeptical about the third model in particular (for the time being), despite how well it fits.

1. Link to the full qpAdm results.
Posted by Awale Ismail at 5:00 AM