A while back, actually almost 8 years ago, Dr. David Reich at Harvard Med and his colleagues came out with a rather intriguing model for South Asian population genetics. They proposed that virtually all South Asians were mostly some sort of mixture between two core populations. Ancestral North Indians and Ancestral South Indians with the model only growing more complex ever since. [1]


The basic concept being that one population related to modern-day West Asians and Europeans came in from the Northwest (ANIs) whilst one was seemingly indigenous to South Asia and was, originally, proposed to be somewhat intermediary between West Eurasians and East Asians (ASIs).

And, as you can see, the model got somewhat more complex as time went by, even without our recent influxes of ancient DNA. "ANI" came to be seen for what it was; a composite. It seems to be mostly made up of Neolithic Iranian-related ancestry with some steppe ancestry owed to Indo-Aryan speaking pastoral nomads whose descendants descended upon Central and South Asia late into the Bronze Age, bringing the Indo-Aryan languages to South Asia. [note]

There they would have encountered farmers of the BMAC culture in Central Asia who were likely quite Neolithic Iranian-like. These Indo-Aryan speakers, likely quite similar to Northeastern Europeans (i.e. Lithuanians), most likely intermixed with farmers in Central Asia and then moved on into Northwestern South Asia (i.e. the Indus Valley) to a pre-modern civilization more or less on the verge of collapsing (The Indus Valley Civilization) and from there; further intermixing with locals seems to have occurred.

In my opinion, based on the population genetics of modern South Asians, the inhabitants of Northwestern South Asia were likely, as is likely the case with the BMAC farmers, quite similar to Neolithic Iranians and were thus a mixture between Basal-rich/"ENF"-like ancestry and Ancient North Eurasian-related ancestry. They probably, at this point in time, also carried ancestry from local Hunter-Gatherers whom they'd encroached upon by migrating over from West Asia and that's where "ASI" comes in.

The local Hunter-Gatherers look to have been Andamanese and Australo-Melanesian-related peoples who today have their most persistent descendants in populations like Paniyas who actually cluster somewhat close to the likes of Papuans on a global PCA (principal component analysis) based on 166,000 autosomal SNPs: 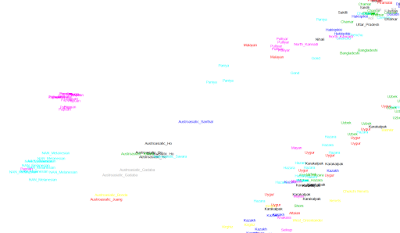 The "ASI" model somewhat changed in that ASI now seems like something Eastern Non-African  (rather than being some intermediate between West Eurasians and East Asians) and is often acknowledged by academics such as Reich to be something related to Andamanese Islanders like the Onge, hence why the Onge are used as a stand-in for "ASI" in this run from the recent Lazaridis et al. paper: 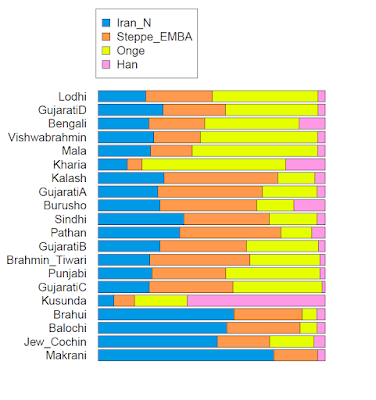 Onges are probably somewhat better stand-ins than Paniyas since they seem to lack West Eurasian admixture entirely when Paniyas, despite looking to be mostly "Eastern Non-African", are definitely partly West Eurasian so something like an ADMIXTURE cluster based on them and some other heavily ASI admixed South Asians won't yield a pristine enough "ASI" stand-in. Though Harappa did a pretty good job as far as I can see.

Granted, even utilizing Onges won't really do as, while they're certainly related to whatever "ASI" is, they're definitely not exactly like it and some notable genetic drift has occurred between the two as far as I can tell. Basically, we need ancient DNA if we're to really make things solid when dealing with ASI.

Things also became a little more complicated on the West Eurasian front lately. For example, you might notice that that figure from the Lazaridis paper shows more "Steppe" related ancestry in the various South Asian populations than the Harppa run implies.

This is mostly because, up until now, we've generally seen the Steppe admixture in South Asians as being something Northeastern European-like (i.e. similar to Lithuanians) based on how South Asians often registered such ancestry alongside Gedrosian, Caucasus (or Caucasus-Gedrosia which seems to correlate well with the Neolithic Iranian and Caucasus Hunter-Gatherher-like ancestry in the region), Southwest Asian and Mediterranean. (some bits of these other clusters like "Mediterranean" are probably owed to their steppe ancestors too) [note] 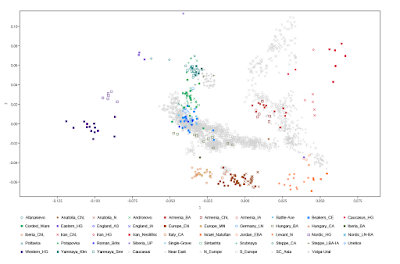 And lo and behold, when we finally got our hands on some Sintashta and Andronovo cultures samples; they indeed looked quite similar to modern Northeastern Europeans. A mixture between Yamnaya-like people, Neolithic Anatolians and Villabruna-Cluster Hunter-Gatherer (WHG) ancestry leaning more on being Yamnaya-like.

So... Things should seem settled I suppose and the old "Caucasus-Gedrosia + Mediterranean + Southwest Asian + Northeastern European + Ancestral South Indian + others" model should be all done, no? South Asians are probably, in my humble opinion, something Sintashta-Andronovo-like + something Neolithic Iranian-like + ASI + others.

But, some argue that the model is just somewhat different and roughly agree with the figure above which implies that the steppe ancestry in South Asia is perhaps more Yamnaya-like [note] and thus, thanks to the greater Caucasus Hunter-Gatherer-related ancestry (Caucasus Hunter-Gatherers and Neolithic Iranians are very closely related) in these types of steppe pastoralists; South Asians (as well as others) might be more Steppic than originally imagined via models dependent on Northeastern Europeans and ancients like Sintashtas.

David Wesolowski over at Eurogenes is one proponent of this alternative view on things. However, I personally don't, for now, make much of this model. I think Yamnaya-like steppe pastoralists prove a better fit at times because of their Caucasus Hunter-Gatherer-related ancestry which works to deflate the Neolithic Iranian-related ancestry in South Asians and over-represent how "steppe" they really are.

Their steppe ancestry levels, in my humble opinion, are perhaps somewhat decently-represented by the data in an old run created by "Kurd" at Anthrogenica where he used Sintashta samples which was then pored over by the author of Vaedhya to show us the following results:


I find the alternative Yamnaya-like admixture model less convincing because, as far as I know, there's really no archaeological proof for Yamnaya-Afanasevo-like pastoralists making deep incursions into Central Asia and Northwestern South Asia and, even if they did, it's strange that they'd remain so heavily steppe after wading through Central Asia (inhabited by farmers such as those of the BMAC culture who were most likely Neolithic Iranian-like for the most part), Afghanistan and then also more northerly areas of Northwestern South Asia given the heavy steppe proportions that arise when they're utilized on South Asians. [note]

For all I know, David could very well be right here but, for the time being, I find the "Sintasha-Andronovo-like + Neolithic Iranian-like + ASI + others" model more convincing than anything else.

But regardless of which of the two models is true, most South Asians are mostly made up of Neolithic-Iranian-related ancestry, some form of Steppe ancestry and whatever ASI exactly is, alongside negligible, non-existent, or quite notable admixture from the likes of East Asian-related people and Africans depending on the population (i.e. Bengalis and their notable East/Southeast Asian-related ancestry).

Things will definitely become more clear once ancient DNA starts flooding in from South Asia and I hear that's certainly in the works.

3. The Near-Eastern Roots of the Neolithic in South Asia, Gangal et al.

1. There is interestingly a phenotypic and not just genetic difference between Yamnaya-like people and Sintashta-Andronovo-like people: [-]

2. There is apparently some notable Ancient North Eurasian-related ancestry in South Indian populations like Paniyas despite how they don't at all show more proper "West Eurasian" components to justify the levels of ANE-related ancestry they show. i.e. I've heard but can't confirm that groups like Paniyas may show at most ~20% CHG-related admixture but in fact about ~25% "ANE".

I have no idea why this is (if it's true) or if there seriously was ANE-related ancestry in South Asia that predated even the arrival of Neolithic West Asians but if this admixture is quite legitimate; there's something even more complex than simply being Australo-Melanesian and Andamanese-related in "ASI".
Posted by Awale Ismail at 3:13 AM