It looks like we finally have some Jomon ancient genomes from Japan. We have five ~3,000 year old samples from around Fukushima who've been genotyped for their autosomal DNA and they're quite intriguing to say the least. 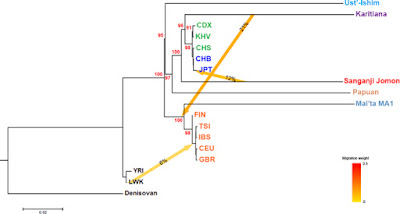 They seem to look like proto-East Asians of some sort. Genetically distinct enough to be separate from Eastern Non-Africans like Papuans but clearly not exactly like East Asians such as the Han Chinese.

However, I think I should give some people a low-down on the Jomon before I go any further. Japan used to be entirely inhabited by Hunter-Gatherers between ~10,000 BCE to roughly ~300 BCE (Jomon period). They were quite an intriguing Hunter-Gatherer culture as they produced a certain degree of sedentism thanks to the rich resources around them allowing for such a life-style.

Another interesting fact about them that's long had people's curiosities piqued is that they didn't seem traditionally East Asian in terms of phenotypic traits like facial morphology, hair & eye type, teeth shape and so on. They, at best, looked like the traditional East Asian looks still in their "proto-stage" of development:

They were seemingly quite hairy, lacked epicanthic folds as well as the more thick straight hair you often see among East Asians while having perhaps more wide facial features as well as fuller-lips (see here, for example). They did, however, seem to be de-pigmented in a manner similar to modern East Asians so they weren't dark-skinned like the Villabruna-cluster Hunter-Gatherers of Europe.

However, much like in Europe, Japan was eventually settled by farmers from the outside. In the case of Europe the farmers came from West Asia (specifically Anatolia) but the farmers came from mainland East Asia in Japan's case. They were people carrying the rice-farmer cultural package which formed in China and they seemingly migrated to Japan from mainland East Asia. Their advent brought about the Yayoi period of Japanese history. 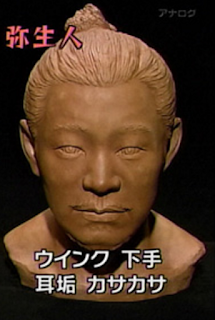 Above is a reconstruction of what some Yayoi period farmers looked like. They looked much more traditionally East Asian than the Jomon period Hunter-Gatherers (epicanthic folds, thicker straight hair etc.). It was these people who seemingly brought alleles in genes like EDAR which are responsible for certain East Asian phenotypic traits, traits that were seemingly missing in pre-agricultural Japan. (see here)

Anyway, due to the interesting phenotypic differences at play, some people have wondered if the Jomon Hunter-Gatherers would turn out notably distinct, from a genomic standpoint, from other East Asians and that does indeed seem to be the case based on these samples: 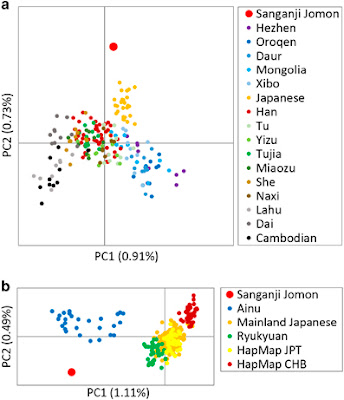 When more "regional PCAs" (principal component analyses) based on autosomal SNPs are produced; they definitely seem notably distinct from virtually all modern East Asians and Southeast Asians with the modern Mainland Japanese, Ainus and Ryukyuans coming off as intermediates of sorts between them and other East Asians like the Han Chinese which clearly implies that they're some sort of mixture between Sanganji Jomon-related people and Han Chinese-related people. [note]

At any rate, when thrown into a global PCA- :

It's intriguing how they pull downward along the Y-axis and a bit more toward West Eurasians than groups like the Han Chinese do (if you're having trouble with the population acronyms click here). This is something Melanesians and Papuans also do in comparison to East Asians like the Han Chinese: 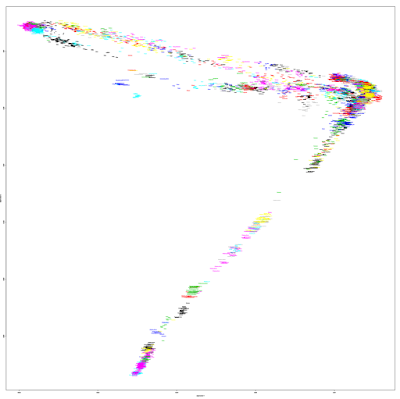 Though those groups also show a strange pull towards African populations (how they pull downward on the above Y-axis) even though they're, in terms of genetic drift (i.e. as noticeable via Fst values) and divergence datings (likely slightly exaggerated by their Denisovan admixture), more distant from African populations with little to no Eurasian ancestry than East Asians are. (see here)

At any rate, these Jomon samples seem "East Asian" but not "East Asian" if that makes any sense. They're essentially distinct enough Eastern Non-Africans to be split from Papuans yet they're not exactly like East Asians such as the Han Chinese, though they definitely share a lot of genetic drift with modern East & Southeast Asians in general and are closer to them than they are to populations like Papuans and Melanesians: 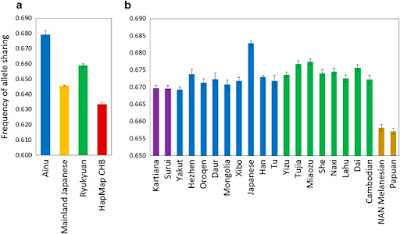 This is quite intriguing as it implies much of what makes "East Asians" genetically East Asians (as in differentiated from other Eastern Non-Africans) formed well before the phenotypic traits we traditionally associate with them developed.

This is of course possible because phenotypic traits like hair-type, facial morphology as well as skin, eye and hair pigmentation (major traits that tend to distinguish modern Humans from each other) seem to be, collectively, controlled by a few hundred SNPs among the 10 million SNPs found in our genomes. It doesn't take radical genetic shifts to create notable phenotypic differences between modern Humans. I.e. less than 10 SNPs are responsible for most of the skin pigmentation difference between Norwegians and Yorubans.

1. A partial nuclear genome of the Jomons who lived 3000 years ago in Fukushima, Japan, Kanzawa-Kiriyama et al.

1. Should be interesting when some third-parties get their hands on these genomes. I'll be interested to see qpAdm and ADMIXTURE results using these samples so we can see exactly how much ancestry the average Japanese person owes to Jomon-type people. The PCA implies it's rather significant but the allele sharing and tree-mix imply somewhat otherwise... Modern Japanese people also have a whole lot of Y-DNA D which really peaks in Ainus and has, as a result, long been thought to trace back to Jomon Hunter-Gatherers, for example.

2. I also wonder if these samples show any Ancient North Eurasian-related ancestry (also see here). Though the study did include MA-1/Mal'ta boy and they make no mention of such admixture.
Posted by Awale Ismail at 7:04 PM