I got curious and asked David over at Eurogenes to try and run something to see how valid "Eastern Non-African" looked in terms of genetic drift shared between groups.

For instance, would Han-Chinese people share more genetic drift with Onges and Papuans than with Villabruna-Cluster Hunter-gatherers (basically "WHG"), Ancient North Eurasians and Eastern European Hunter-Gatherers? Well, it does seem so:

Han-Chinese people share more drift with Onges and Papuans than they do with MA-1, the Karelia HG or the Villabruna HG which, I suppose, outright shows that they share more ancestry with the former two populations which implies their ancestors diverged from them later than when they diverged from the majority of the ancestry in VHGs, EHGs and ANEs.

One thing that intrigues me about this is how we apparently have very early evidence of "Modern Humans" in Oceania. From what I understand, there's archaeological evidence in places like Australia that imply Homo Sapiens Sapiens began inhabiting the region as early as ~50,000ybp which really makes things a little confusing if those Humans were the ancestors of modern Australian-Aborigines and, to some extent, also Papuans. [1] 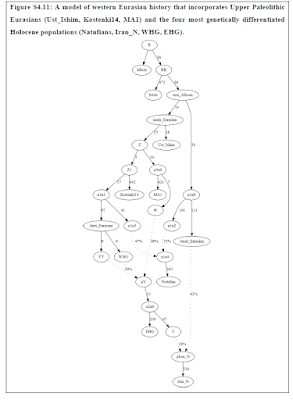 Ust-Ishim is basal to all Out-of-Africa populations from East Asians to Onges to European & Siberian HGs and seemingly also Papuans and Australian-Aborigines [2]. The only exception so far being the theoretical "Basal Eurasians".

So, if the arrival date was ~50,000-40,000 years ago then ENAs, and whatever Paleolithic Europeans and Siberians are mainly descended from, would not, likely, have too notably diverged yet (or diverged at all) and it's thus incredibly unlikely that notable "ENA" substructure had formed by this point. 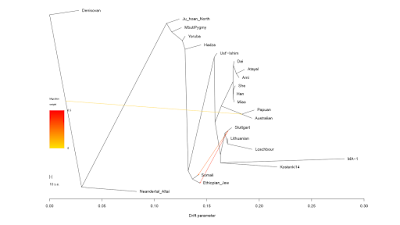 Basically, this implies modern Oceanians are either not the descendants of these early migrants at all or are perhaps some sort of mixture between them and later "ENA" migrants, with the latter group comprising much more of their ancestry?

But I wonder if even the latter situation would cause modern Oceanians to look as "closer" to East Asians as they do. If they're a mixture between something ENA + a highly drifted Human population who may have not even participated in the traditional dispersals out of Africa + Denisovan admixture; they should look arguably much more divergent from other Out-of-Africa populations as a whole but Ust-Ishim looks to be basal to their non-Denisovan ancestry like he is to everyone else and they seem to share in a later ancestral clade with East Asians and the Andamanese that they do not share with Paleolithic Europeans and Siberians.

An abundance of ancient DNA from "Eastern Non-African" regions should make things more illuminating if anything, I guess.

1. First Footprints: The Epic Story of the First Australians, reviewed by Douglas Bird

East Eurasians: the ones you don't know about