Some other interesting things to note about this paper's new samples are the Southeast African and Chadian samples. 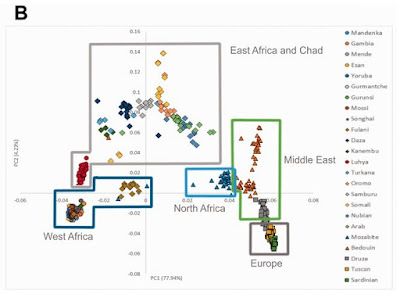 What I find most interesting about all of this are the Chadians, quite frankly. What's quite intriguing about their West Eurasian ancestry is that it, based on the ADMIXTURE results above, looks to be mainly derived from Northwestern African-related people (Mozabite-like peoples) as its mainly derived from the light blue cluster. This means they're basically some sort of East African version of the Fulani samples, especially in the Daza samples' case. They seem to lack the more Bedouin and Druze related affinities the Oromo, Somali, Nubian and Sudanese Arab groups are showing.

Although, they also differ from the Fulani samples in that they mostly don't show ancestry from the grey Sardinian peaking cluster. Their West Eurasian elements are wholly swallowed up by the light-blue Mozabite peaking cluster. I don't know what significance that might have but it's worth taking note of.

I really don't know much about Chad's history but I wonder if they used to be Chadic speakers? I'd be interested in seeing what sort of R1b-V88 frequencies these two populations have if anyone's seen Y-DNA data on them... Baqara Arabs (بقرة العرب) like the Messiria tribe seem to have notable R1b-V88 frequencies (see here) which, to me, implies some of their ancestors were Chadic speakers (like the Hausa) before their Arabization.

Anyway, I'll leave any further theorizing and observations to future posts that will hopefully be based on new PCAs and perhaps also ADMIXTURE runs where these new samples will be run alongside the various other HSS samples out there.

1. Extensive Admixture and Selective Pressure Across the Sahel Belt, Triska et al.
Posted by Awale Ismail at 8:34 AM