Saw this post over at Eurogenes and felt I had to read the study being shared. The study Eurogenes' author shared makes two main claims:

The first statement would make some sense and, as far as I recall, craniometric data on other Upper-Paleolithic Europeans didn't tend to imply a strong similarity to Papuans or Melanesians or the like.  So, it would be rather odd if Kostenki-14 looked a lot like those populations. He'd be something of a strange outlier, I believe. Gerasimov and company seem to have just exaggerated the affinities based on certain traits Kostenki-14 has like marked alveolar prognathy which this new paper, for the record, finds he does actually have going.

The second statement, however, is what's suspect. Firstly, if we're talking about a so-called "Caucasian complex" where Kostenki-14 seems overall more similar to various pre-historic Europeans than to Southeast Asians, Ryukuans, Papuans and Melanesians then it seems clear that he would fit within such a complex and prove to, overall, share more craniofacial similarities with fellow pre-historic (and probably even modern) Europeans but it's otherwise clear that he does not actually fit into the more modern definition of what constitutes being "Caucasoid" in cranioform:

The position of the Kostenki 14 man in the CV I–II space is illustrated by a graph (see Fig. 1a): this individual, by the sum of craniometric indicators, is unambiguously characterized by the European complex of characters and shows no noticeable deviation toward tropical groups. Note that we are not speaking about its full similarity to any individual ancient European series. On the contrary, the results of our analysis show a sufficiently noticeable anthropological distinctness, which CV IV demonstrates (see Table 1). It separates the Kostenki 14 individual from all the series included in the analysis (see Fig. 1b). The size of differences is very great, amounting to 43% of the total variability range according to CV IV. This vector practically fully depends on one character, namely, the nose height, which is extremely small in the Kostenki 14 individual. Interestingly, the face height in this case is of little significance.

As someone who was once quite interested in craniometrics (and still somewhat am); I'd seen Kostenki-14's skull years ago and how low his nose height in particular seemed even at face-value was never lost on me: 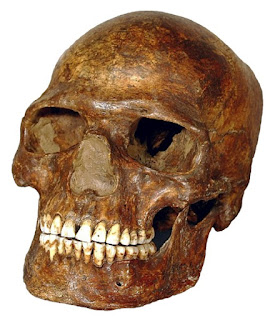 Simply compare that to this archetypal example of a modern male "Caucasoid" skull of European origin from Bone Clones Inc., Osteological Reproductions: 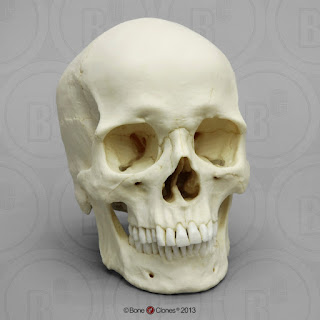 Just so some are following, having just this much of an outlier nose height would would disqualify him from being an actual "Caucasoid" in the more traditional and modern craniofacial sense of the term, and this without even going into other ways in which he looks distinct such as his marked alveolar prognathism and likely rather paleolithic robusticity.

Now, finally, there's one other statement that really stuck-out to me in the Eurogenes post and that's that Mikhail Mikhaylovich Gerasimov's reconstruction of Kostenki-14 is wrong. This is not true, as far as I know. The Russian paper doesn't even touch upon the reconstruction's validity (they actually display it without any sort of refutation against it in their study); all they seem to refute about Gerasimov's previous work on Kostenki-14 is the morphological affinity Gerasimov and company noted toward groups such as Australo-Melanesians.

The types of reconstructive techniques Gerasimov employed have been reportedly rather accurate. And reconstruction itself, when done right, can definitely be more of a science than an art.

But also, reconstruction is a different matter entirely from the sorts of craniometric measurements conducted in this new paper or that were once put together by Gerasimov and others. Their measurements or findings in that respect being off and overstating an affinity toward Australo-Melanesians does not actually play into how accurately they reconstructed Kostenki-14's looks. Though I would be interested to see other anthropologists take a crack at reconstructing Kostenki 14 in the future.

But all in all, he wasn't "Caucasoid" in the traditional sense and yes; that reconstruction, as far as we know, was roughly what he looked like in terms of facial features.

1. The Upper Paleolithic Man from Markina Gora: Morphology vs. Genetics?, Khartanovich and Zubova 2017

3. Facial Reconstruction, Jenny Omstead 2011
Posted by Awale Ismail at 8:16 AM