Over a year ago, in a post, I delved into a Chinese account by an author named Duan Chengshi (died around circa. 863 CE) where he mentioned a region called Po-pa-li which is often assumed, by various authors, to be a predecessor to Berbera or to be talking about North-Central Somalia as a whole: 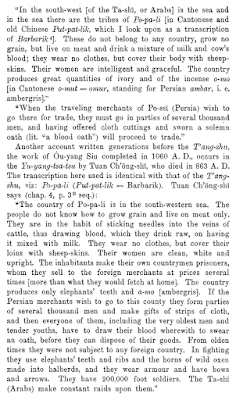 It seems the author the above text comes from believes this to correspond with the Greek's more southerly "Barbaroi" region (North-Central Somalia) rather than, like some authors, tying it simply to the settlement of Berbera in particular. And honestly, after giving this a good read, it does not seem to be to be a description of people from North-Central Somalia during the 700-800s CE for the following reasons:

This is all makes me think "Po-pa-li" was a region farther south of the Horn of Africa or perhaps even far south into Southern Somalia rather than at all indicating that what we're reading about is a predecessor to modern Berbera or North-Central Somalia as a whole.

What's even more damning is that this same author shares a different Chinese account of later origins (1100s CE) owed to Zhao Rugua which speaks of a country on the East African coast called "Pi-pa-lo" (assumed to be the Somali coast) and it fits with not just one part of but being nearly the whole of the Somali coast much more than the "Po-pa-li" of the 800s CE: 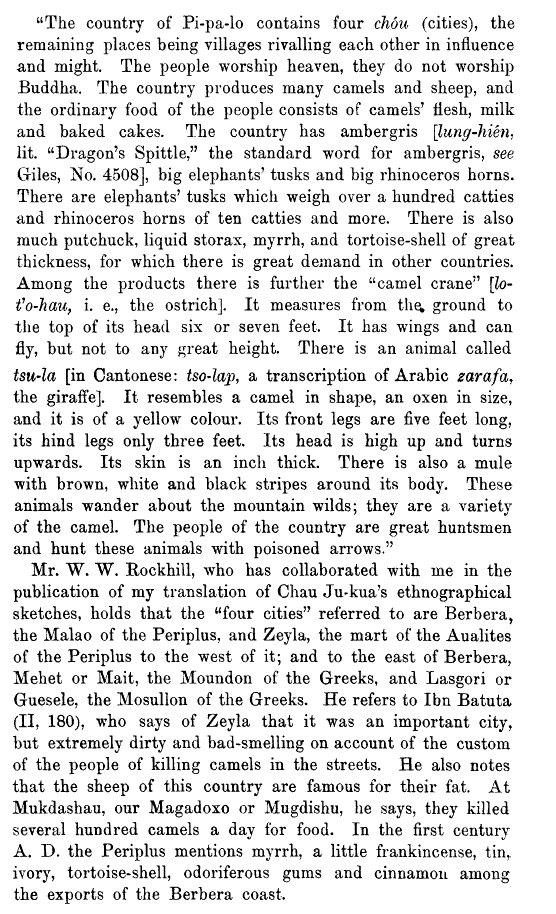 Let's take into account all of the things this country has together all at once:

The Somali coast, or what Medieval Arab/Islamic sources knew as "Bilad al-Barbar" (Somali coast roughly from Zeila down to Mogadishu or areas somewhat south of Mogadishu like the mouth of the Jubba river) is perhaps the only place on the East African coast where all of these things can be found together.

For example, the Eritrean coast once had some Rhinos present and, to this day, has several semi-nomadic pastoralist peoples who herd camels, sheep, goats and cattle present on its coast whilst having, to this day, a small Elephant population but it didn't have Giraffes.

Also, Tanzania and Kenya might have had most of the animals mentioned but they didn't really have camels except for some areas of Kenya, I suppose. But also, these regions' coastal inhabitants did not practice a semi-nomadic pastoralist way of life or have that sort of diet so the description of the people's diet and the emphasis on their livestock conflicts with these being people on the Zanj/Swahili coast who would have mostly been sedentary farmers and fishermen.


The author is quite right, in my humble opinion, to tie this "Pi-pa-lo" region with the Berbera/Barbar/Somali coast. It mostly fits very well as a description of that region of East Africa although certainly not as a description of solely North-Central Somalia or the area where we now find the city of Berbera, given the mentioning of Giraffes, for example.

The etymology also makes somewhat more sense this time. "Pi-pa-lo", according to the author, comes from "Pat-pa-lo" in Cantonese which makes better sense as some sort of bastardization of "Barbara" or some such (he roughly picks up on this too).

At any rate, I'm currently rather skeptical that "Po-pa-li" was actually a description of the Somali coast. I'm particularly sure it wasn't referring specifically to the area where modern Berbera now sits, or even North-Central Somalia. Perhaps it was referring to people somewhere along Southern Somalia given the Elephants, however? A people who had yet to become Muslims, hence the slaving? A people who possibly had not yet adopted camel domestication given the lack of camels in the description (they sound like they were mainly cattle-pastoralists)?

I don't know and can't be sure that this region wasn't really where authors traditionally think it was but that's just my personal view after reviewing the Chinese account again. However, the the "Pi-pa-lo" region described much later (1100s CE), sounds much more blatantly like it fits with what the medieval Islamic/Arab world knew as Bilad al-Barbar.

2. The Periplus of the Erythraean Sea, translated by Wilfred H. Schoff

1. This is actually an old post I 90% completed during early 2017. I got busy back then and it just sort of fell into the back-burner until I forgot about it. Noticed it again recently and just cleaned up a little for posting...

2. Feel free to point out any mistakes I may have made in the comments (or point out something I may have missed), this is an old subject I'm still a little intrigued by.