As has been mentioned on this blog in the past, Somalis often form a Cushitic or pseudo-Cushitic component, dubbed that way mostly because it peaks in them (Lowland East Cushitic speakers) and then peaks in other Horners (Cushitic & Ethiopian Semitic speaking alike) who obviously would share a lot of much more recent post-Neolithic ancestry with Somalis.

This blog post is simply going to outline the interesting findings of "Cushitic levels in Horners" if Somalis are used as a proxy for Cushitic and essentially this is what Hodgson et al. & Shriner et al. find:

Hodgson et al. essentially gives Somalis a pseudo-Cushitic cluster they dub "Ethio-Somali" which hits a level of about ~57% in the Somalian Somali samples, there's also the question of the Nilo-Saharan admixture clearly shared between the Horner populations as well as Cushitic admixed groups such as Ari Cultivators & the Maasai that you can also find in the paper.

However Hodgson et al. incorrectly finds Omotic admixture in Somalian Somalis who actually seemingly lack it, in fact the Omotic levels in populations like Ari Cultivators go down once you do what a fellow ethnic Somali did with his own old ADMIXTURE run and remove the more inbred Ari Blacksmiths, a recent study is working to show that Ari Cultivators are essentially a less inbred edition of their Blacksmith counterparts [-] however the Cushitic admixture noted to be in them while likely lower than is purported in Hodgson et al.; is very likely quite real as it is not the only study to note such admixture.

I ultimately adjusted Hodgson et al.'s Omotic levels by adding that Somali's likely very accurate (the best we have) Omotic levels  for each Horner population and then where Hodgson et al. & Shriner et al. really do pull through and do some good work is that they note the extra/ newer West Asian admixture Agaw & Ḥabesha populations have over Somalis.

Hodgson et al. notes about ~12% new Arabian/ Southwest Asian-like admixture in Agaws and a certain amount of Caucasian-like (dubbed "Eurasian") admixture at a rate lower than 5%: 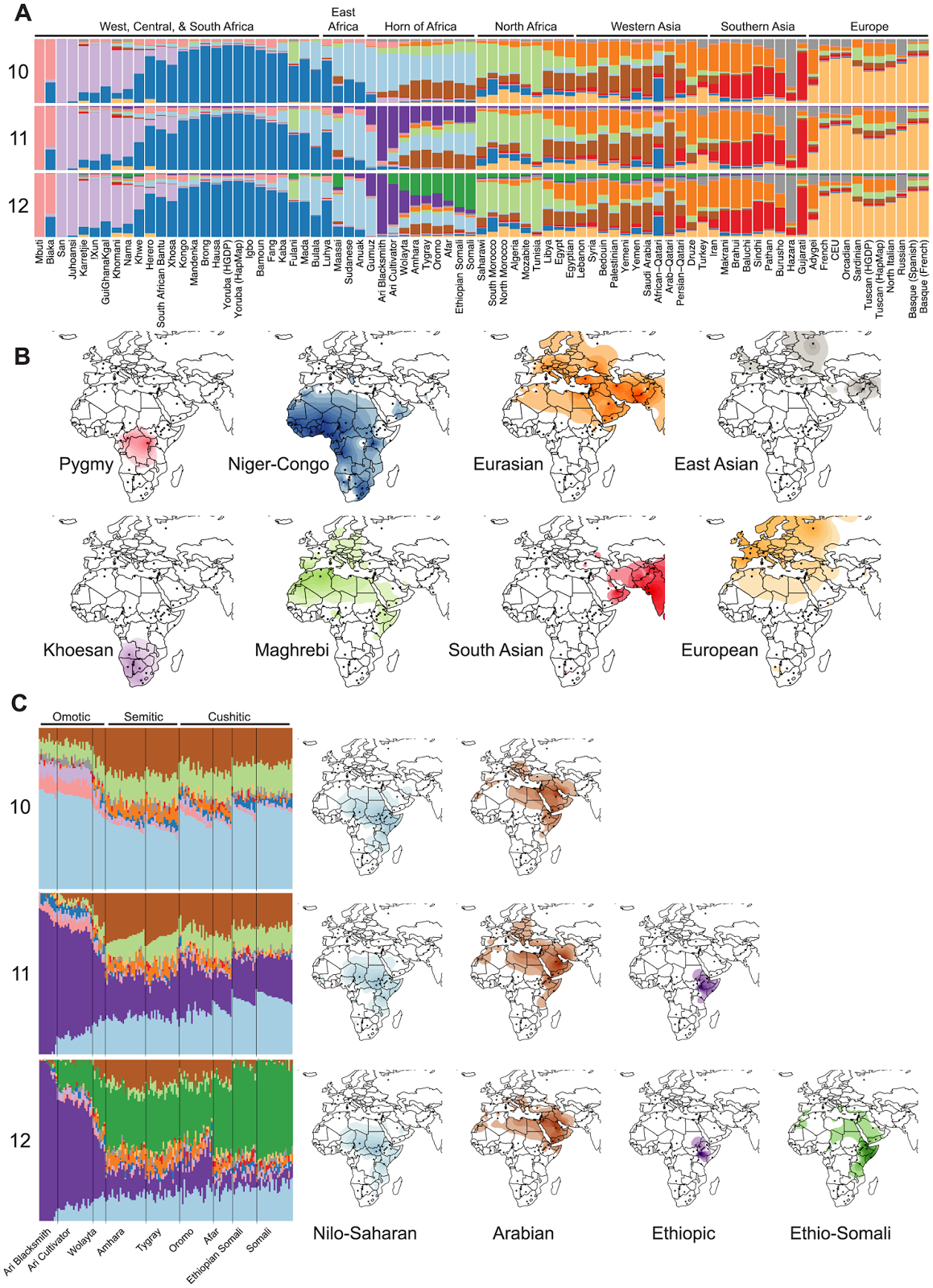 I merely selected the highest bound possible by their calculations and gave Xamir Agaws ~16% new West Asian admixture over Somalis but their levels could be anything between 12 to 16% (the exact proportion of newer Caucasian-like admixture is not shared as it is below a level of 5% as is stated in the earlier table).

For Ḥabeshas it's more clear cut and we get ~7-8% new Caucasian-like admixture & ~16% new Arabian/ Southwest Asian-like admixture. Somalis show small visually visible but clearly lower than ~5%  (as they do not show up in this table from Hodgson et al.) levels of this new West Asian admixture, whether or not they actually have such admixture and this is more of them simply reacting to ancestry carried by populations very close to them is up to one's own interpretation but they have very little if any of this admixture; ~1-4% at most hence that chart throws in a safe high bound of ~3%.

This coupled with the Omotic in Ḥabeshas & Xamir Agaws would essentially make Tigrinyas for example ~64% Cushitic if Somalis were to be used as a proxy for Cushitic/  that much ancestry is clearly much more recent likely post-Neolithic ancestry shared with Somalis. It's higher for Xamir Agaws at ~75% & lower for Amharas (due to their higher Omotic admixture) at ~60% roughly.

Though, Hodgson et al. notes a low below 5% Maghrebi-like influence in non-Somalis (it's only visually visible) at K=12 after Ethio-Somali's appearance and while this is a mixed component with a strong African influence, one can perhaps give the values in these populations a very low negligible ~1-3% lower bound for those results of shared ancestry above.


Shriner et al. finds similar results and manages to add another population into the mix:


The study finds higher levels of shared ancestry between these Horner populations than Hodgson et al. does though notably not by much at all. One very notable thing about Shriner is that it gets the Omotic levels of each population quite right and notes none in Somalian Somalis & the levels in the other populations were actually only ~1% or so different from the levels in that Somali's ADMIXTURE run. Didn't really need adjusting in this case.

Its Omotic levels are only inaccurate for the Ethiopian Somali samples (~8%) however they have two outliers who skew the average  quite a bit even in that Somali's run, their removal would neaten things up a bit.

It finds lower new West Asian admixture levels in each population (~2% less in Ḥabeshas, much less in Xamir Agaws/ "Afars") & it kindly adds Beta Israels/ Ethiopian Jews to the mix. It kindly gives us the exact numbers for each component though it has a large proportion of "unassigned" admixture in each population.

It's strange that the ~6% non Arabian/ Southwest Asian-like admixture in Amharas it notes is "Berber" & not "Levantine-Caucasian" which is what they find in Tigrinyas, it's likely an error as there is no radical difference of any sort between Amharas & Tigrinyas, perhaps just their Omotic levels but that's mostly it.

Beyond that it's just the same pattern of a mixed West Asian ancestry + East African ancestry cluster/ component in Somalis (~56%) + "Nilo-Saharan" which seems to make up the bulk or entirety of the shared ancestry between Horners & Cushitic admixed populations in this paper as well.

However one should note that Somalis are not to be taken for an exact example of "Cushites". Somalis themselves show signs of acquiring some admixture that other much older examples of Cushites may have not had.

For one, Somalis in mostly all runs will show some sense of a Mediterranean & Caucasian (or one of the two) influence in runs where the Maasai or Datooga (groups with South Cushitic pastoralist admixture; these being the groups to have spread the West Eurasian ancestry in Southern & Southeastern Africa noted by Pickrell et al.) or Ari Cultivators (unknown Cushitic admixture) do not ever show such influences, to my knowledge the Borana also lack such influences. However this influence is clearly gobbled up in the Somalis' Cushitic-esque clusters/ components: dubbed Ethio-Somali in Hodgson et al. & Lowland East Cushitic in Shriner et al.

Hodgson et al.'s own run at K=5 shows an example of this admixture where Somalis show more Northern West Asian-like affinities in the form of the "European" component while the Maasai & Ari Cultivators don't (though the Maasai may show a slight hint):

Various independent ADMIXTURE runs have found very much the same data. I.e. in Dodecad's globe13 Somalis will show Mediterranean while the Maasai & Ari Cultivators simply do not. In Eurogenes K=15 (a run honestly not meant for Horners though) Somalis will show West & East Mediterranean affinities like other Horners do but the Maasai & Datooga alongside Ari Cultivators do not.

The Datooga plot in PCA plots (Principal Component Analysis) much closer to Horners and are more South Cushitic admixed seemingly than the Maasai which if I recall correctly; Tishkoff et al. had at ~50% Cushitic (as do Hodgson et al. among other papers, roughly):

It's the same story in other runs (virtually all really) such as in MDLP where Somalis will show Mediterranean & Caucasian affinities like other Horners do whilst the Maasai & the like do not. Same goes for HarrapWorld's run where Somalis will show Caucasian & Mediterranean affinities while Ari Cultivators (unknown Cushitic input) & the Maasai will not:

However this West Asian contribution as is likely-> is very ancient and would obviously predate the influence in Xamir Agaws & Ḥabeshas. It also says something that this admixture is nevertheless still absorbed into the respective Cushitic components in Hodgson & Shriner (Hodgson even noticing it at K=5 as a more Northern West Asian & non-Arabian/ Southwest Asian affinity) so that does indeed say a lot about how old it is.

It takes time for clusters like Ethio-Somali, Omotic & Maghrebi which are inherently mixed and made up of older more basal components to form, the populations they peak in had to have been genetically isolated for a very long time, they're also often inbred.

Nevertheless, this merely points out that Somalis are not to be taken as a perfect example of "Cushites" or some form of preserved "purity"-> it merely simplified those charts (making Somalis 100% Cushitic) to show what proportion of ancestry in other Horners is clearly shared with Somalis.

For Ḥabeshas it's clearly ~60 to 70% of their ancestry and ~65 to 80% for Agaws (Beta Israel + Xamir). So not only are Horners very much made up of the same basal components (West Asian/ Early Neolithic Farmer ancestry + East African) with a greater fundamental similarity than you'll find between Europeans or West Asians at large but they all seem to share the majority of their more "recent" (within the larger context of Human existence) likely post-Neolithic ancestry.

1. A colleague I correspond with often tends to assume the ~8 to 10% new West Asian admixture Ḥabeshas have over Xamir Agaws and even to a smaller extent over Western Agaws like Beta Israels who only made a linguistic shift to Ethiopian Semitic over the last few centuries (they were originally Agaw speakers:  [-] , [-] ) is likely owed to what they gained from shifting to Semitic.

Linguistic shifts often bring with them a certain degree of admixture from the population that brought the language branch or family to the area. I.e. Turks have a certain proportion of East Asian-like admixture likely gained from shifting to Turkic however Turkics/ Central Asians as of late have been found to have admixture such as ANE in large proportions [-] along with some ENF/ West Asian ancestry & WHG so some of the ANE & WHG in Turks is likely also owed to the peoples who shifted them to Turkic.

I find the model that some of the extra West Asian in Ḥabeshas (~10% or less) is owed to shifting to Semitic to be quite likely but we can't be 100% sure.

Note for those who don't know: Ḥabeshas used to be Agaw/ Central-Cushitic speakers as is noticeable via the Agaw substratum in their languages (shifting to Semitic likely around ~3,000 BP [-]). If Agaws were used as a proxy for "Cushitic" then Ḥabeshas would more or less come out ~90% Cushitic (give or take).

2.  The world plot is hampered somewhat due to utilizing low quality SNPs/ a lower number of SNPs than the creator was used to. I.e. 100,000 SNPs were used instead of 200,000 mostly because the Kenyan Somalis and the Pagani Somalis (IIRC) were tested using a different chip set hence only 100,000 or so of their SNPs overlapped.

What this ultimately does is that groups demonstrate a little less variation than they usually would in such a plot however the data is relatively the same. Thank you very much to the author of Eurogenes for it nonetheless.

3. The basal components that seem to make up the majority of the ancestry in Horners (ENF (Early Neolithic Farmer) / EEFs without WHG admixture + East African) are for now rather weakly and poorly defined, to really get a grasp on them we'll need ancient genomes from the West Asia + North Africa & East Africa.