Massive migration from the steppe

The newest study aimed at ancient European population genetics is quite a treat to say the least. I thought it deserved an extra blurb post on its own while I'm still reading it.

It has some profound new things to say about European population genetics but for the moment I'll let its abstract do the talking:

"We generated genome-wide data from 69 Europeans who lived between 8,000-3,000 years ago by enriching ancient DNA libraries for a target set of almost four hundred thousand polymorphisms. Enrichment of these positions decreases the sequencing required for genome-wide ancient DNA analysis by a median of around 250-fold, allowing us to study an order of magnitude more individuals than previous studies1-8 and to obtain new insights about the past. We show that the populations of western and far eastern Europe followed opposite trajectories between 8,000-5,000 years ago. At the beginning of the Neolithic period in Europe, ~8,000-7,000 years ago, closely related groups of early farmers appeared in Germany, Hungary, and Spain, different from indigenous hunter-gatherers, whereas Russia was inhabited by a distinctive population of hunter-gatherers with high affinity to a ~24,000 year old Siberian6. By ~6,000-5,000 years ago, a resurgence of hunter-gatherer ancestry had occurred throughout much of Europe, but in Russia, the Yamnaya steppe herders of this time were descended not only from the preceding eastern European hunter-gatherers, but from a population of Near Eastern ancestry. Western and Eastern Europe came into contact ~4,500 years ago, as the Late Neolithic Corded Ware people from Germany traced ~3/4 of their ancestry to the Yamnaya, documenting a massive migration into the heartland of Europe from its eastern periphery. This steppe ancestry persisted in all sampled central Europeans until at least ~3,000 years ago, and is ubiquitous in present-day Europeans. These results provide support for the theory of a steppe origin of at least some of the Indo-European languages of Europe."

Scandinavian Hunter-Gatherers such as Motala12 are essentially Western-European Hunter-Gatherers with a certain amount of Ancient North Eurasian ancestry. Lazaridis et al. in its supplemental demonstrates the gene flow into Motala12: 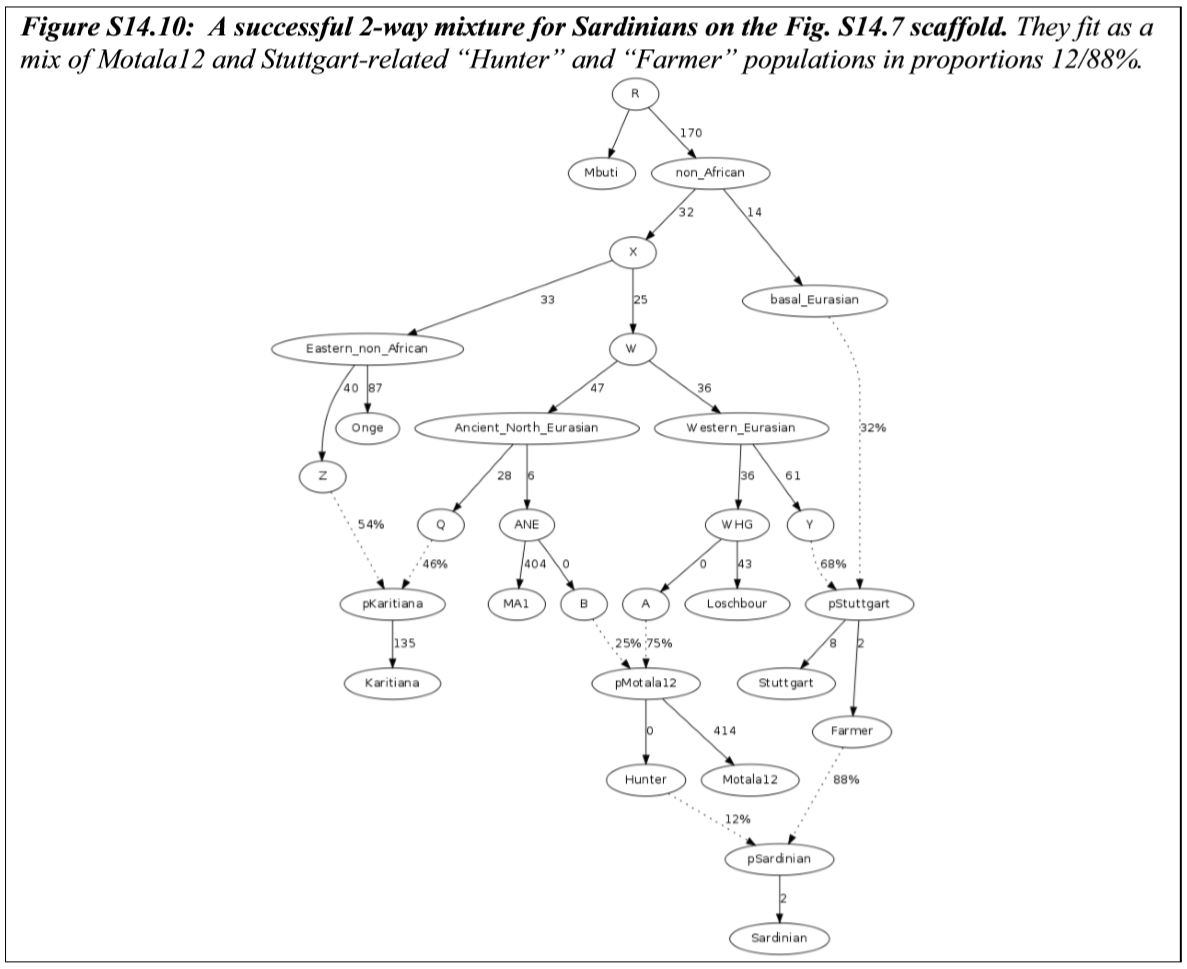 "Middle Neolithic Europeans from Germany, Spain, Hungary, and Sweden from the period ~4,000-3,000 BCE are intermediate between the earlier farmers and the WHG, suggesting an increase of WHG ancestry throughout much of Europe. By contrast, in Russia, the later Yamnaya steppe herders of ~3,000 BCE plot between the EHG and the Near East / Caucasus, suggesting a decrease of EHG ancestry during the same time period."

The paper specifically outlines this West Asian influence as "Armenian-like" in other passages. Eventually they discover that Middle Neolithic Europeans from the rest of Europe (i.e. Germany & Spain) plot essentially between WHGs & earlier Farmers; suggesting an increase in WHG ancestry by the Middle Neolithic. While Late Neolithic & Bronze Age samples from the rest of Europe sit between the Yamnaya (Steppe nomadic pastoralist population) & Early to Middle Neolithic Europeans who are clearly distinct from this Yamnaya population that as the paper notes looks like it's drawing ancestry from a Caucasian-like population as well as EHGs. 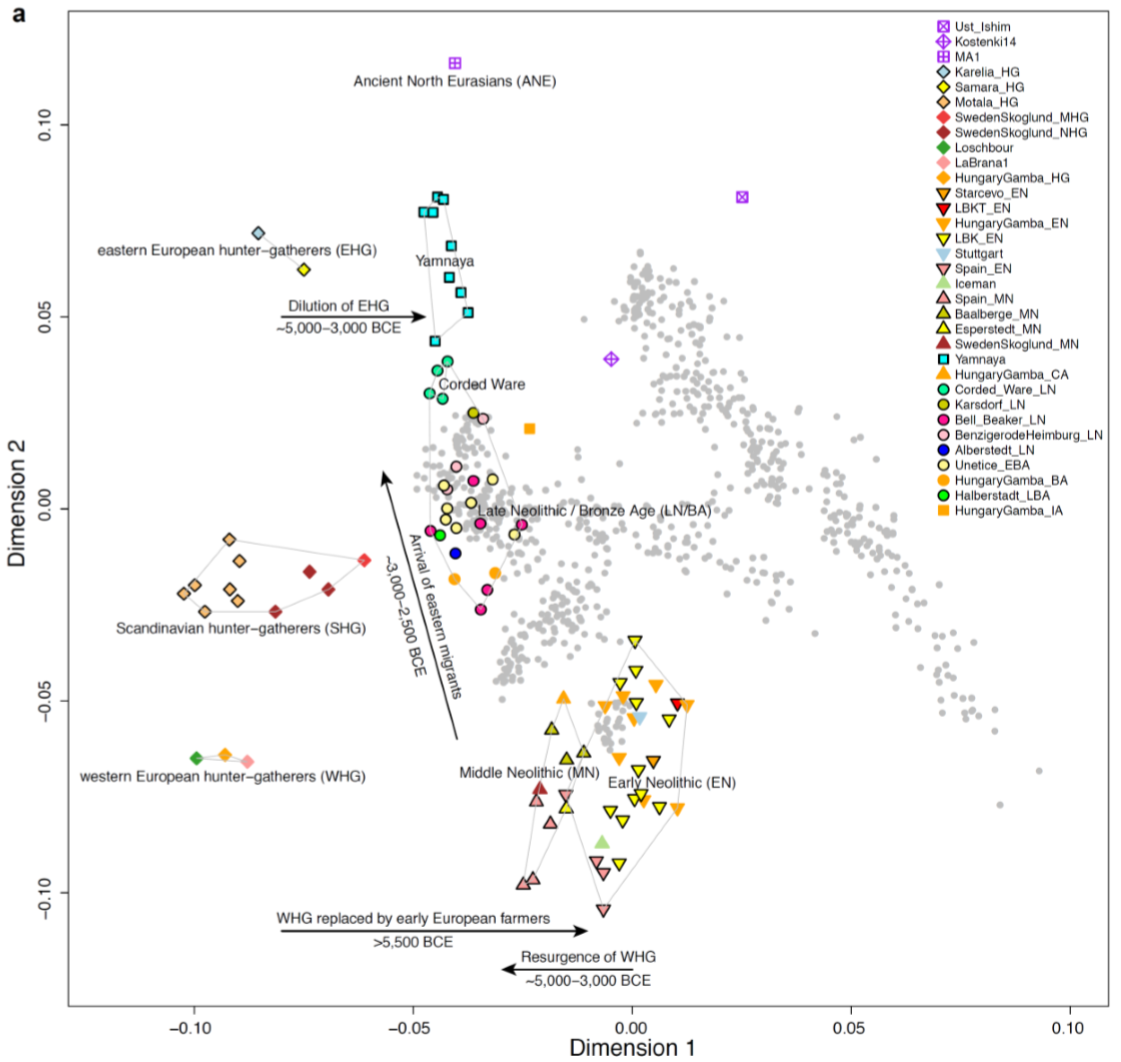 What implications does this have for Europe as a whole? Well, what the title of this post implies, which is that Europeans as a whole trace a very substantial segment of their ancestry back to the Pontic-Caspian Steppe (Yamnaya) for one: 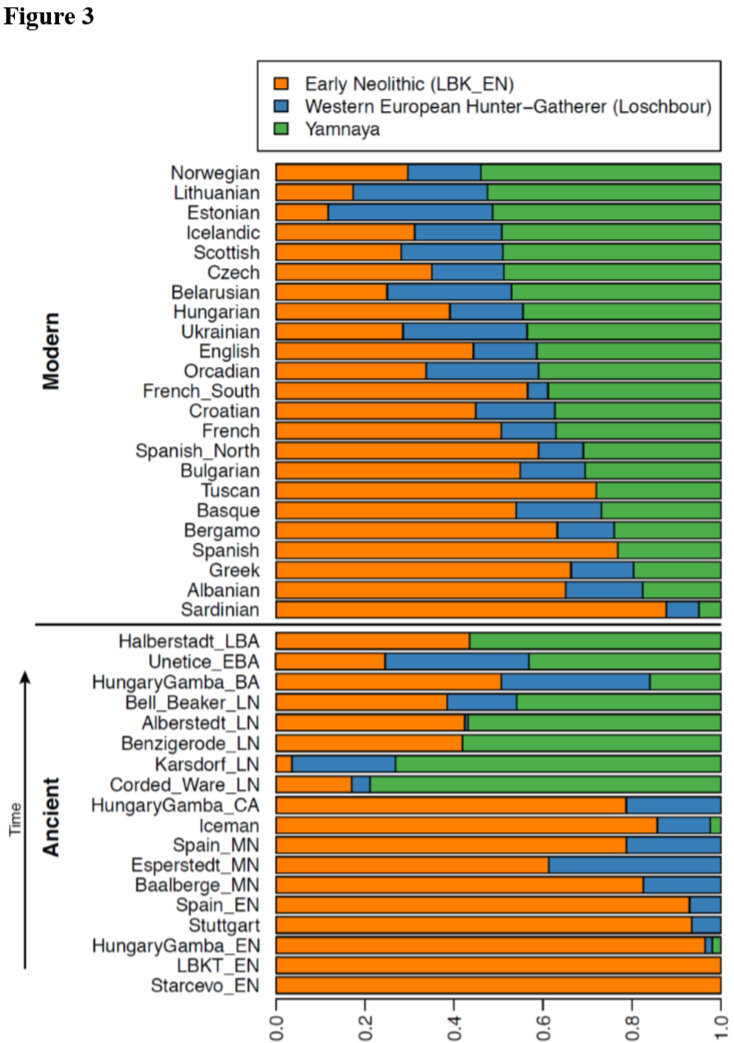 There is less of this Steppe derived ancestry in Southern Europeans such as Tuscans, Spaniards, Greeks, Albanians & Sardinians but for other populations such as Lithuanians, Norwegians, Icelanders & Scots; it seems to make up far more of their ancestry than Early European Farmer (Early Neolithic) & WHG do.

The paper as it says also believes this massive migration from the Steppe to corroborate a Steppe origin hypothesis for at least some Indo-European languages:

"These results provide support for the theory of a steppe origin of at least some of the Indo-European languages of Europe."

Frankly, this study also has astounding things to share about the history of Y-Haplogroups R1b & R1a but for more on that I would guide you toward more focused and knowledgeable hands than mine when it comes down to European population genetics. For the time being; this is good progress for the Kurgan Hypothesis.

This is all very staggering frankly. For one it shows that Europeans acquired West Asian ancesty via more than one migration into the general zone of Europe, one from Early Neolithic Farmers who were ancestral to Early European Farmers & another that was intrusive to the Steppe.

In their series, the first peoples of Central Europe to show signs of Yamnaya ancestry are the peoples of the Corded Ware Culture at around ~2500 BCE. As they noted, Corded Ware share elements of material culture with the Yamnaya. Their genetic evidence shows clear indications of a migration from the East of Europe to the West, that the Corded Ware are a monument to, as you can see in the chart results above; Corded Ware individuals trace the vast majority of their ancestry back to the Pontic-Caspian Steppe and only some to Early European Farmers & un-mixed Western-European Hunter-Gatherers.

"By extending our model to a three way mixture of WHG, Early Neolithic and Yamnaya, we estimate that the ancestry of the Corded Ware was 79% Yamnaya-like, 4% WHG, and 17% Early Neolithic (Fig. 3)."

The Steppe ancestry in Europe also seems to be key in spreading ANE across the continent, though its been known for a while now that the spread of Indo-European languages likely aided in the spreading of Ancient North Eurasian ancestry across Europe. If we are to use Haak et al.'s model, the Ancient North Eurasian ancestry in Tuscans for example would be entirely derived from the Pontic-Caspian Steppe, the rest of their ancestry is Early European Farmer.

"Further data are needed to determine whether the steppe ancestry arrived in southern Europe at the time of the Late Neolithic / Bronze Age, or is due to migrations in historical times from northern Europe."

Out of the three-way model Haak et al. has mapped out (Yamnaya + WHG + EEF) it's clear that Steppe ancestry (Yamnaya) is what brings ANE to at least many Europeans. At any rate it seems clear that for Europe in particular; the spreading of Indo-European languages had a key part in spreading Ancient North Eurasian ancestry.

"Our results support a view of European pre-history punctuated by two major migrations: first, the arrival of first farmers during the Early Neolithic from the Near East, and second of Yamnaya pastoralists during the Late Neolithic from the steppe (Extended Data Fig. 5). Our data further show that both migrations were followed by resurgences of the previous inhabitants: first, during the Middle Neolithic, when hunter-gatherer ancestry rose again after its Early Neolithic decline, and then between the Late Neolithic and the present, when farmer and hunter-gatherer ancestry rose after its Late Neolithic decline. This second resurgence must have started during the Late Neolithic/Bronze Age period itself, as the Bell Beaker and Unetice groups had reduced Yamnaya ancestry compared to the earlier Corded Ware, and comparable levels to that in some present-day Europeans (Fig. 3)."

As a whole Wolfgang Haak and others have a lot more to say & for the time being I would advise following the Eurogenes blog for good updates on things we're learning from it, however I believed a few excerpts and shares as to where this paper is going for now was worth sharing. Needless to say; the Steppe/ Eastern Europe has had a profound part in shaping the genetic landscape of modern Europe.

1. If the West Asian population that makes up a segment of the ancestry in the Yamnaya pastoralists was Armenian-like then they must've indeed had Ancient North Eurasian ancestry? Armenians are mostly Early Neolithic Farmer + for now what looks to be ~10-15% ANE ancestry and a negligible segment of WHG ancestry.

If this Near Eastern/ West Asian population was Armenian-like then a certain amount of the ANE in Europe today is owed to a pre-historic West Asian population. Although one must remember that the EHGs they mixed with were much heavier on ANE ancestry than Armenians are and the mixture between these Armenian-like West Asians & Eastern European Hunter-Gatherers as this paper says; diluted the ANE ancestry in the Steppe.