Seems as though we're in for a new paper on the ancestry of Ashkenazi Jews which seems to posit that they do indeed have European admixture but mostly of Southern European/ Italic origins.

It seems to be a rather valiant effort, mind you and even finds some Eastern European ancestry in Ashkenazi Jews but I must agree with David Wesolowski over at Eurogenes (the blog's author); this paper looks to be on to something but there's one key flaw; it's using modern populations and not ancient samples to make its inferences. This is relevant because if we're learning one thing through the constant sampling of ancient remains across Europe is that "Modern Populations ≠ Ancient Populations". 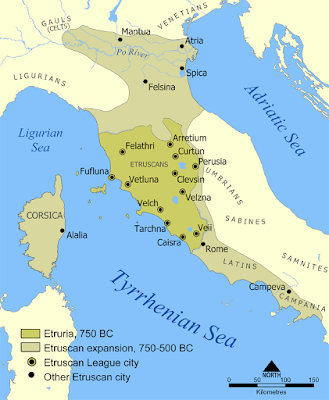 This principal seems to even ring true for some ancient populations that existed as early as ~2,500 years ago. They've sampled three ancient Etruscans from about ~2,500 years in the past and surprisingly enough; they do not seem to be well-represented by modern day Tuscans in Italy despite modern Tuscany and surrounding parts of the Italian peninsula corresponding well with where the Etruscans once were. [1]

Modern populations in my humble opinion are simply not a viable proxy for the peoples who lived where they now toil away a few or several thousand years ago. They're surely descended from those people to some great extent but clearly not a frozen image of said ancient group's genome.

And herein lies the problem; we lack ancient genomes from the Levant. And therefore we honestly lack a true proxy for what could be an ancient Levantine. David voices this concern on his blog; posting that he believes the ancient Near East wasn't genetically what it is now. And he's probably right. We can't be sure exactly how Southern European Ashkenazi Jews are because we lack an example of what a "pure" pre-Western Jew exodus and even pre-Arabization/ Arabian conquest Levantine looked like so we lack something concrete to compare them to and see just how much they've shifted away from what Yahudim were like before their exodus.

Haplogroups as you can see for example through the J1 Project. This effect seems to be greater for example in Muslim Levantines who prove somewhat distinct from their Christian neighbors though not at all by any note worthy amount. [2]

Cypriots may prove a good example of the ancient Levant perhaps because they're an island population given that Sardinians; a fellow island population come out to be a genetic isolate in Europe [3] [4], predominantly descended from Early European Farmers with very little Steppe derived ancestry. Islanders can at times prove a preservation of what close by mainland populations used to be like as they could have avoided whatever land expansion affected their mainland kin.

However Cypriots who speak Greek for example could very well have Southern European admixture due to becoming Hellenized and shifting to Greek linguistically. Though any reader reading this must forgive me as I'm not too knowledgeable about Cypriot genetics other than that Cypriots seem to look like a Levantine population (similar to Western Jews and Arab Levantines more than anything else) especially in terms of their fundamental ancestral components and the proportions they have them at (Eurogenes K=8).

Other groups like Samaritans may prove to be reliable genetic isolates of the Levant but still; we're learning via Europe time and time again that assuming modern populations are a perfect example of their ancient predecessors is a slippery way of seeing things.

Suppose Levantines from ~2,000 years ago or from right before the ancestors of Ashkenazi Jews departed prove to actually carry a notable amount of Western European Hunter-Gatherer and Early European Farmer-esque ancestry. Wouldn't that prove the results of this paper (the exact proportions of Italic-esque ancestry in Ashkenazis) to be incorrect? And Ashkenazim would suddenly look a lot more Near Eastern.

I'm doing a lot of blabbering here to say something quite simple in truth. We lack ancient samples from the Levant and neither Western Jews nor Arab Levantines are to be taken as a trustworthy example of the ancient Levant as both groups have seemingly experienced non-Levantine gene flow, one from Europe (mostly from Southern Europe) and the other from the Arabian Peninsula. Until we have ancient individuals from the Levant to compare these populations to; we should remain cautious about trusting how non-Levantine either group is.

However I do not at all doubt the core of what this paper will be preaching (I did once though...) which is that Ashkenazim do seemingly have some substantial non-Levantine admixture mostly of a Mediterranean European nature and also a much much smaller amount of Eastern European admixture.