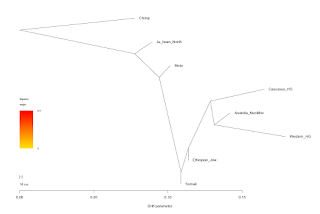 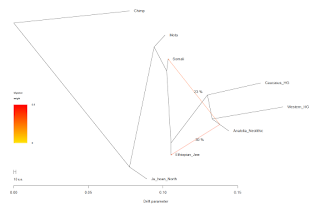 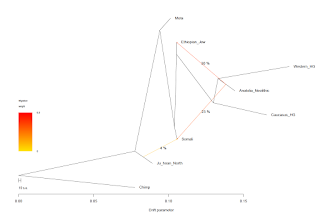 The tree-mixes above seem to focus the West Eurasian gene flow into Somalis & Beta Israels on Anatolian Neolithic Farmers which makes sense outside of their more overt WHG-related ancestry; they essentially seem to be made up of a component akin to "ENF/EF/Near Eastern/Southwest Asian" which the likes of Somalis, Habeshas and Agaws have always shown a highest affinity for. [note]

However in the past Amharas & Tigrinyas (Habeshas), Xamirs & Beta Israels (Agaws), Wolaytas & Oromos as well as sometimes Somalis have shown noticeable levels of the "Caucasian" component with this presence being more overt among all of the non-Somali populations.

So I suppose I took great interest in the progress of this "component" and how it could be integrated into analyses like qpAdm or ADMIXTURE. It's practically impossible to create a perfect ancient component in ADMIXTURE when the pre-historic samples available are so small in number and can't form a cluster such as with these two CHG genomes.

However more independent (non-academic) but experienced people who make ADMIXTURE calculators have attempted to create a component that corresponds as well as possible with these two pre-historics (at levels of 95-100%) by, to my understanding, using both them and some modern populations to form the cluster.

That K=11 run is incredibly messy in my humble opinion and sadly utilizes (like Lazaridis et al.) George Ayodo's Kenyan Somalis alongside myself to create its Somali results & the slight Borana-looking admixture in some of them could skew things + that "East African" component is a mixed component of West Eurasian (entirely Southwest Asian related according to Dilawer) & "African" ancestry. So I don't entirely know what to make of the run, it's future derivatives seem better but it needs some work. [note]

PuntDNAL's K=10 seems a bit more pristine although the "African" ancestry in these populations looks rather deflated. Punt says his "CHG" component shows up in the likes of Satsurblia (a CHG) at a level of about ~98% & that he's quite sure about these estimates although I find it perplexing that the Maasai who in the past never showed hints of "Caucasian" or anything of the sort are showing CHG, this too may need some work.

Perhaps CHG-related ancestry was present in some Neolithic to post-Neolithic peoples ancestral to even South Cushites but to me "CHG" does correspond with a good amount of the "ANE" type affinities populations across West Asia were showing so it'd be interesting if some Horn Africans show it despite not really showing signs of ANE-related affinities via analyses like ADMIXTURE or formal stats.

Although, one can't jump to too many conclusions as we still need to fully understand "CHG", I suppose.

I cannot truly be conclusive about whether or not this or that population has this or that much "CHG" (or if it has any at all) with the data we have now but my theory for a while since this component surfaced has been akin to what I stated to Dilawer/Kurd at Anthrogenica: 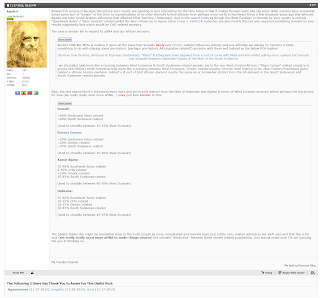 I have a feeling CHG-related ancestry to some extent will appear in the likes of Habeshas, Agaws, various Oromos & Wolaytas and at best appear at lower levels in Somalis like in Punt's run or not appear in them at all. It'll be interesting to see the results of David Wesolowski's own CHG integrating run once it's finished as I have feeling he may produce the best results.

1. Lazaridis et al. uses those Kenyan Somalis as well so that could skew their "Caucasus-Gedrosia" related levels in Somalis although they show oddly lower than usual levels in the "Afars" (Xamir) & Beta Israel samples, the run just generally displays that some Horn Africans do show such ancestry that seems related to the CHG population.

2. Tree-mixes are owed to David Wesolowski
Posted by Awale Ismail at 2:22 PM