Inspired by an old post of Razib Khan's on Anatolian Turks and their genetic relationship to Armenians (and in truth also Pontic Greeks). I decided to make a similar point about the genetic nature of Habeshas, namely Tigrinyas and Amharas. 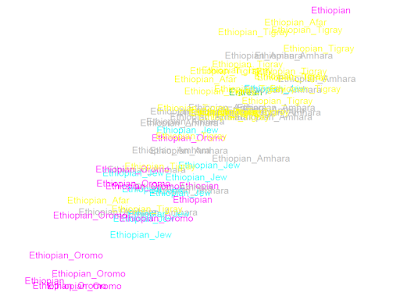 You can see in the above results from a global PCA (principal component analysis) using autosomal DNA data (166,000 SNPs) that Tigrinyas, Beta Israels, Amharas & Xamir Agaws are seemingly extremely close, particularly in terms of their levels of West Eurasian ancestry which tend to vary between ~45-55% collectively.

In another Intra-East African PCA the extremely close relationship between both populations (Agaws; Beta Israels & the Xamir & Habeshas; Tigrinya and the Amhara) generally remains: 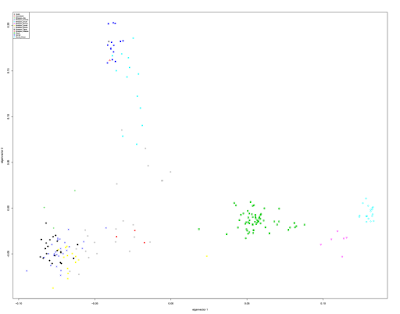 Habeshas like Amharas and Tigrinyas are essentially Ethiopian Semitic speakers whose languages have a Central-Cushitic (Agaw) sub-stratum and like with many linguistic shifts throughout history; some genetic contribution from the people whose language they adopted is to be expected. Linguistic shifts do tend to leave a genetic impression, however small or massive.

They tend to be massive when there's clear evidence of large scale population movements (i.e. via archaeology and/or historical records) and borderline population replacements where large-scale intermixing occurs. A good example of this would be the Indo-Europeanization of Peninsular Europe from the Pontic-Caspian Steppe: 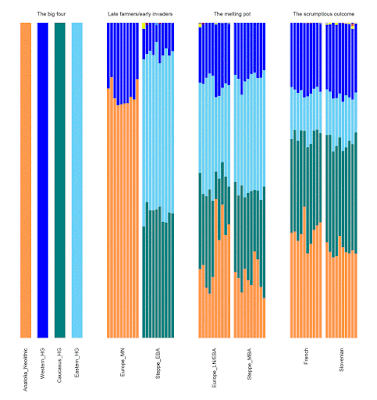 In this case, we know through various peer-reviewed studies on population genetics where ancient genomes have been sampled, linguistic study, and archaeology; that pastoral nomadic peoples originally from the Steppe moved west-ward into the rest of Europe and essentially began intermixing with the local non-Indo-European speaking Farmer and Hunter-Gatherer populations and, in time, their languages (the Indo-European languages) would come to dominate Europe as they do today and mostly all Europeans trace a substantial portion of their ancestry to them. [1] [2] [3]

A more "small" contribution which still led to a linguistic shift and clearly not massive population changes would be the Turkification of Anatolia which was a gradual process, so gradual in fact that decent portions of Anatolia as late in history as the early 1900s was still Indo-European or ultimately non-Turkic speaking: 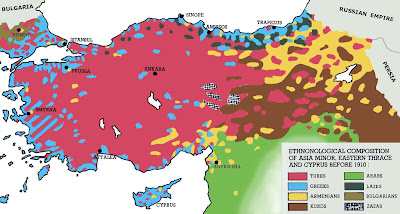 Populations like Pontic Greeks, Armenians among some other groups formerly quite numerous in Anatolia/Turkey are scarce in Anatolia now due to terrible events such as the Armenian genocide.

However, Anatolian Turks are clearly, from a genetic standpoint, mainly derived from peoples very much like Armenians (and various Anatolian Greek peoples such as Pontic Greeks, if I'm not mistaken) as Razib Khan outlined in his own article on this matter:

The overwhelming majority of the ancestry in Anatolian Turks is clearly derived from native peoples from Anatolia itself with only something along the lines of ~10-15% of their ancestry being derived from the Central Asians who started the shift of their region toward Oghuz Turkic. This is not something Razib and Razib alone realized but something studied & backed up by a plethora of peer-reviewed genomic studies. [4] [5]

This ultimately non-trivial but not substantial contribution in Anatolian Turks' case is a good example of a "small" genetic contribution caused by a linguistic shift and the question is ultimately:

From a genetic point of view, just how substantive does the Southwestern Arabian contribution in Habeshas seem to be, and just how much of their ancestry is clearly derived from the Central-Cushitic speaking inhabitants of the Horn who themselves seem to have some Omotic-related and later West Eurasian admixture? - note

If we observe the above ADMIXTURE analysis from Hodgson et al. 2014 and the below analysis of the same sort with similar results from Shriner et al. 2014- : 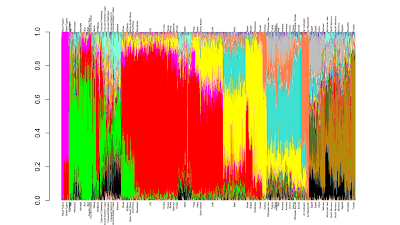 -it becomes quite evident that the overwhelming majority of Habeshas' ancestry is shared with their Central-Cushitic speaking neighbors.

Whilst Beta Israels were essentially Ethio-Semitized (from a linguistic standpoint) within the last few hundred years, they've maintained a similar autosomal pattern to the Xamir and seem to lack and/or show less of the "newer" West Eurasian elements found in Habeshas that're no doubt, in some part, owed to their Southwestern Arabian/Semitic speaking ancestors:

Though it can be assumed that there is a little bit more "extra" West Eurasian ancestry in Habeshas because both these studies neglected to add an adequate "Mediterranean" cluster which Horn Africans such as Somalis, Oromos, Habeshas, Agaws and so on do show in various runs. Then one must take into account the fact that Ancient Southwestern Arabians likely had some "African/SSA" ancestry related to the East African cluster. 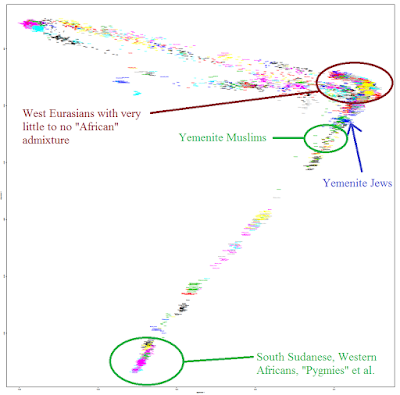 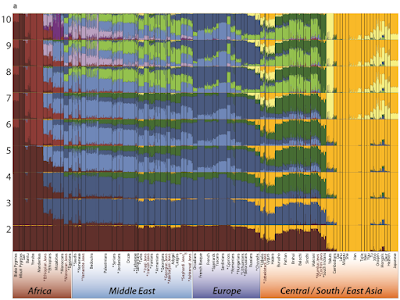 So if we take the results from Hodgson et al. where Tigrinyas are ~4% more "Arabian" than Xamirs at K=12 and ostensibly ~4% more "Caucasian" and then just assume that if a proper "Mediterranean" cluster were present it would also perhaps amount ~4% or less, then the extra West Eurasian elements in Habeshas over the Xamir would add-up to about ~12% and if we add a small amount of "African/SSA" ancestry (~1-2%) likely derived from Ancient Southwestern Arabians then we might get something similar to this:

This would make Habeshas, very much like Anatolian Turks, only about ~10-15% "non-native" though the values once we have ancient genomes and even more detailed testing could go up or down, so perhaps ~8-25% should be more of a ball-park to account for any possible increases or decreases. Nevertheless, even if we move away from the Central-Cushitic speaking inhabitants of the Horn so far sampled for their autosomal DNA and simply look at the likes of Somalis- :

-Habeshas such as Amharas and Tigrinyas look to share far more of their ancestry with this population than with Yemenite Muslims, Yemenite Jews or modern West Asians in general and are on a more fundamental scale ("African" Vs. "West Eurasian" ancestry) vastly closer to Somalis than they are to any population native to West Asia: 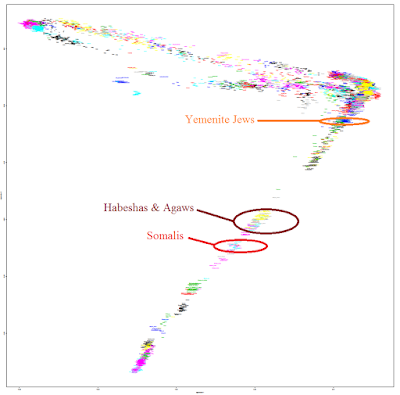 This persists even in regards to what looks for now to be  more "recent" shared ancestry between the two population sets. Similarly, in terms of uniparentals, such as mtDNA & Y-DNA frequencies, one can see that Habeshas are seemingly of largely "native Horn African" origin, sharing the majority of their lineages seemingly with both the "Central Cushitic" & "East Cushitic" speaking peoples of the Horn. [note]

So ultimately, Habeshas are, from a genetic point of view, of mostly "native" Horn African origins similar to how Anatolian Turks are mostly of "Northern West Asian" (Anatolia-Transcaucasia-Iran) descent with clearly some East-Central Asian derived admixture. [note]

Similar to how Turkification was gradual, Ethio-Semitization at the level it is at now was also something that was built up to at  a gradual pace. During the Medieval Period; Central-Cushitic / Agaw speakers were much more widespread in what is now the Amhara region where, sometime after Aksum's collapse, an Agaw dynasty even came to rule parts of the region and is, in some part, responsible for Lalibela's magnificent rock-hewn churches: 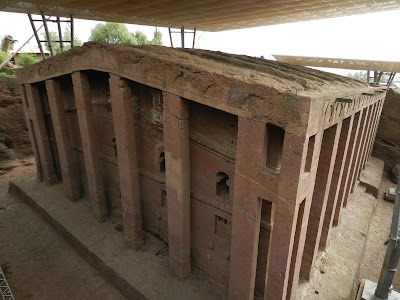 In fact, many "Amharas" or predominantly Amharic speakers in the Amhara region were seemingly Central-Cushitic speakers until not too long ago such as the Qemant people whom Beta Israels are linguistically a part of:

But of course, mass assimilation over the last several centuries has done much to change the demographics of the Northern Ethiopian Highlands and Agaw speakers are mostly a fragmented minority at this point.

Nevertheless, assimilating them has certainly led to some level of heterogeneity among Amharas in particular (and perhaps also some Tigrinyas?) given how heterogeneous and sometimes Xamir-Agaw or Beta Israel-like some Amharas can seem: 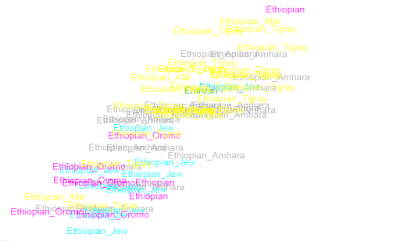 In the end, it seems quite delusional to view Amharas & Tigrinyas as transplants from Southern Arabia or even as a 50-50 split between "natives" and Southern Arabians, they most certainly are not and are seemingly about as "Southwestern Arabian" as Anatolian Turks are "East-Central Asian". It seems obvious from an autosomal and uniparental point of view that the overwhelming majority of their ancestry is drawn from the Cushitic speaking inhabitants of the Horn, most notably so from Central-Cushitic speakers whose language group they were once a part of.

4. Genetic evidence for an origin of the Armenians from Bronze Age mixing of multiple populations, Haber et al.

5. Alu insertion polymorphisms and an assessment of the genetic contribution of Central Asia to Anatolia with respect to the Balkans, Berkman et al.

8. The Genome-wide structure of the Jewish people, Behar et al.