It seems there was indeed good reason to remain cautious about Llorente et al.'s findings that all Africans are part Eurasian or West Eurasian as they've now retracted their old results after getting help from David Reich and company. 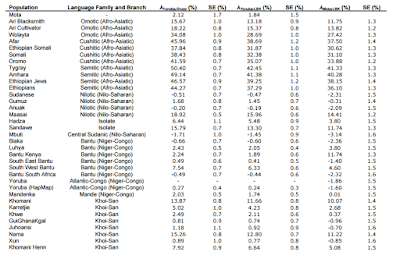 Here's a quote from their erratum:

"The results presented in the Report “Ancient Ethiopian genome reveals extensive Eurasian admixture throughout the African continent“ were affected by a bioinformatics error. A script necessary to convert the input produced by samtools v0.1.19 to be compatible with PLINK was not run when merging the ancient genome, Mota, with the contemporary populations SNP panel, leading to homozygote positions to the human reference genome being dropped as missing data (the analysis of admixture with Neanderthals and Denisovans was not affected). When those positions were included, 255,922 SNP out of 256,540 from the contemporary reference panel could be called in Mota. The conclusion of a large migration into East Africa from Western Eurasia, and more precisely from a source genetically close to the early Neolithic farmers, is not affected. However, the geographic extent of the genetic impact of this migration was overestimated: the Western Eurasian backflow mostly affected East Africa and only a few Sub-Saharan populations; the Yoruba and Mbuti do not show higher levels of Western Eurasian ancestry compared to Mota.

We thank Pontus Skoglund and David Reich for letting us know about this problem."

Funnily enough, despite this, there's still certain issues with their results. For one, their results for various Eastern Africans, now with these adjusted results, make no sense. For one, observe the below results using Yorubas relative to Early European Farmers (LBK): 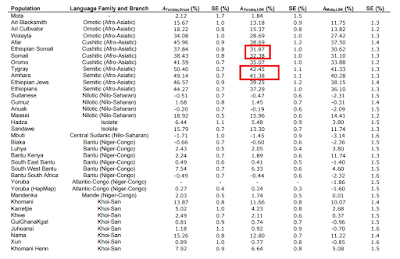 At first I observed the lowered by 10% results when Mota is used relative to LBK and thought that they'd found out something interesting here (that maybe Horn Africans like Tigrinyas and Somalis are much less West Eurasian than previously thought) but you can see there's already something funky going on with these improved stats, at least for various Eastern Africans, in that the 10% drop occurs even when Yorubas & LBKs are used as well.

Problem is... We've had formal stats like this run before... Where Somalis, Tigrinyas, Amharas, Oromos and Beta Israels have been run against or with more or less non-Eurasian admixed African populations (i.e. Dinkas, Yorubas, Anuaks etc.) and more or less fully West Eurasian populations (i.e. Sardinians) and those weren't the results we got at all: 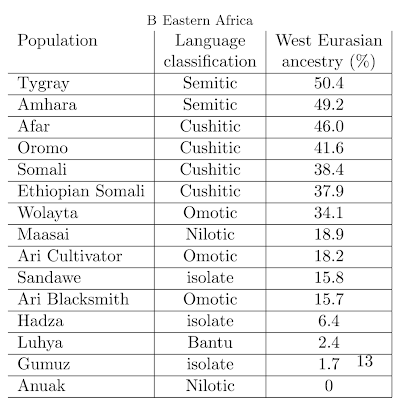 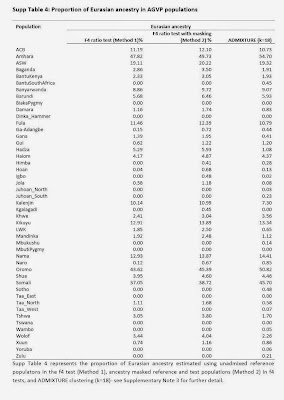 The above results are much more consistent with results we see in ADMIXTURE and also in regards to where Somalis & Habeshas cluster in global PCAs if compared to Anuaks for example: 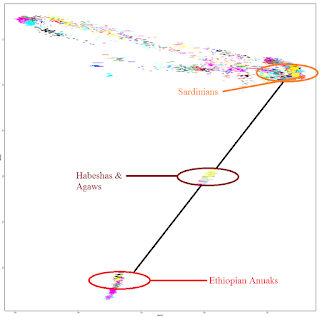 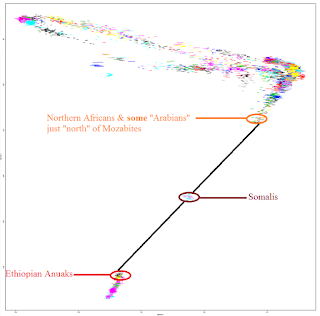 Or when Yorubas are used as the African anchor point: 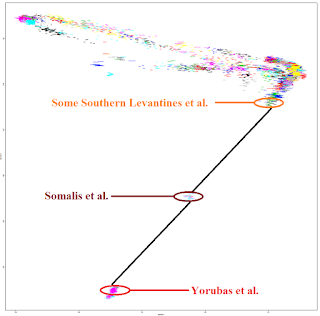 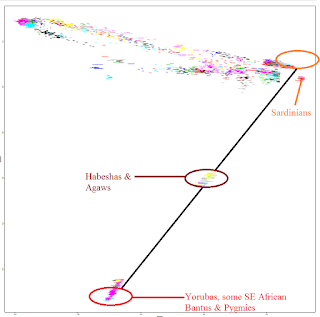 So those ~30% for Somalis and ~40% for Tigrinyas results are about as suspect as Llorente et al.'s old claim that African populations we'd always thought had very little or no Eurasian/Out-of-Africa input were all roughly ~7% Eurasian: 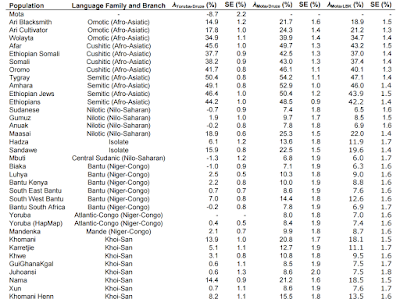 Then there are these issues an Anthrogenica member by the username "Kurd" pointed out upon looking into the Mota genome: 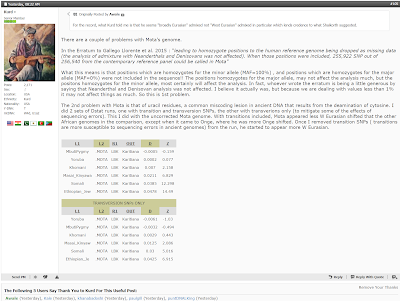 So I personally wouldn't latch on too much to the minuscule details of these new results beyond the fact that they're most likely quite correct about Yoruba or Mbuti folk definitely not being ~7% Eurasian, that always seemed a little odd to me hence why I made this post.

1. I may have to do some edits to this blog post of mine... While I consider it quite on point as to how "African" and West Eurasian peoples like Somalis and Habeshas are, and whilst the Llorente et al. data used in the post seems accurate at least for various Horn Africans, it's a bit tough to just leave up some of that data now. I may edit the post or honestly leave it the way it is because it's to the point enough and there's plenty of other evidence shared beyond the Mota study's data.

2. These chaps were, as a friend of mine put it, a little too eager to get their work published for their own good...

3.  Kurd is using the Lazaridis et al. Kenyan Somali samples in his analyses there and they're just a smidgen less West Eurasian than most Somalian and Ethiopian Somalis who've so far been sampled and some might be Borana admixed. The "Afro-Eurasian" component has a small amount of West Eurasian ancestry in it as Hadzas are used as the basis for it, hence Horn Africans' dipped West Eurasian scores in that run.

4. What could be causing those odd results may also just be the poor choice of using LBKs/Neolithic Europeans as a proxy for Horn Africans like Somalis' West Eurasian admixture.
Posted by Awale Ismail at 10:10 PM