Well, a while ago now I pointed out that, simply using modern DNA, various Southeast Africans clearly looked partly descended from peoples closely related to modern Somalis and other Horn-Africans of Erythraeic and Ethiosemitic speaking origins (see here and here) and it seems ancient DNA is now backing this up:


That's an nMonte model above utilizing a new 3,000 year old pastoralist sample from Tanzania belonging to the Savanna Pastoral Neolithic culture strongly tied to South-Erythraeic speaking people who began leaving the Horn of Africa for Southeast Africa some 3,000-4,000 years ago. You can see the fit is decent, showing significant Savanna Pastoral Neolithic related ancestry in this average for the Maasai Kinyawa samples in the Global-10 PCA. 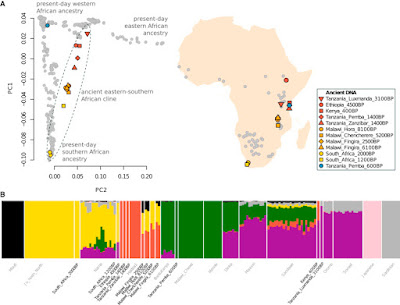 We owe this new sample to a study headed up by Pontus Skoglund and it comes with a lot more details I'll be poring over to some extent quite soon but for now; I'm just putting this paper out there and sharing that we finally have some aDNA backing for what modern DNA, archaeology and linguistics have been positing for quite a while now regarding South-Erythraeic speakers and their influencing of Southern and Southeastern Africa.

Do read the study in the meantime, though.